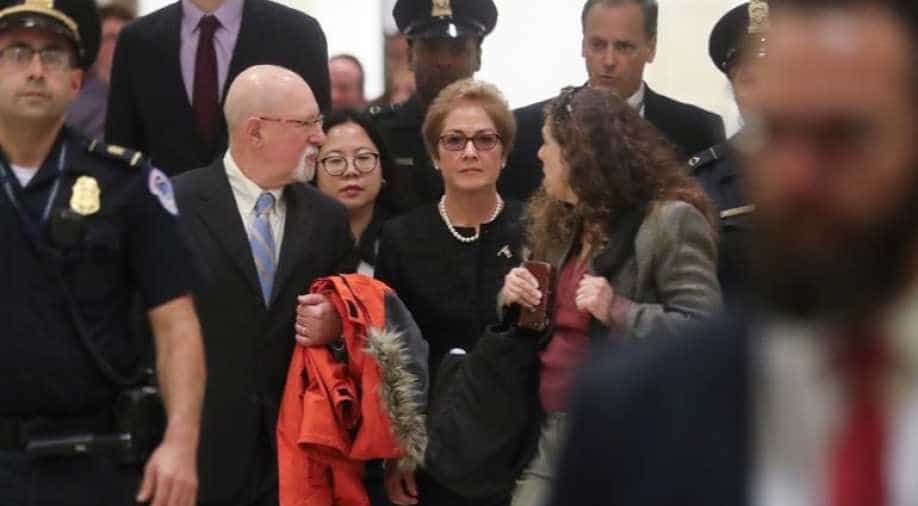 Marie Yovanovitch, the ambassador who was abruptly recalled from Kiev in May, spent more than nine hours in a closed-door meeting with House members and staff.

The former US ambassador to Ukraine on Friday told a House of Representatives impeachment inquiry into President Donald Trump that Trump ousted her based on "unfounded and false claims" after she had come under attack by his personal lawyer Rudy Giuliani.

Marie Yovanovitch, the ambassador who was abruptly recalled from Kiev in May, spent more than nine hours in a closed-door meeting with House members and staff. She had been expected to appear last week, but was told not to by the State Department at the behest of the White House, according to Democratic House members. Lawmakers then issued a subpoena for her appearance and she complied.

Yovanovitch, according to a copy of her opening statement posted online by US media, said she was told by a senior State Department official about "a concerted campaign against me" and said Trump had pushed for her removal since the middle of 2018 even though the department believed "I had done nothing wrong."

She expressed alarm over damage to diplomacy under Trump and warned about "private interests" circumventing "professional diplomats for their own gain, not the public good."

Giuliani has accused Yovanovitch of blocking efforts to persuade Ukraine to investigate the Bidens. The former New York mayor has said he provided information to both Trump and State about Yovanovitch, who he suggested was biased against Trump.

On Friday, Giuliani said: "I was doing it in my role as a defence lawyer" for Trump.

Trump was asked on Friday whether Giuliani was still his personal attorney. He answered, "I don't know."

A person familiar with the situation said Giuliani was still Trump's outside counsel, but would not represent him on matters dealing with Ukraine.

In her statement, Yovanovitch denied any bias. She said Giuliani's associates "may well have believed that their personal financial ambitions were stymied by our anti-corruption policy in Ukraine."

Federal prosecutors in Manhattan are investigating whether Giuliani broke lobbying laws in his dealings in Ukraine, the New York Times reported, citing two people familiar with the inquiry.

On Thursday, two businessmen, Ukraine-born Lev Parnas and Belarus-born Igor Fruman, who helped Giuliani as he investigated Biden, were arrested in what US prosecutors called a scheme to illegally funnel money to a pro-Trump election committee and other political candidates.

The Times said the investigation of Giuliani is tied to the case against Parnas and Fruman.

Asked about the Times report, Giuliani told Reuters: "I never did any lobbying for anyone. If they want to ask me I’m happy to prove it. But they haven’t." A spokesman for the Manhattan US Attorney’s Office declined to comment.

Democratic Representative Denny Heck said he was gripped by Yovanovitch's testimony. "It was that amazing, that powerful, that impactful. And I just feel very fortunate to have been there," he told reporters.

According to a White House summary, Trump in his call to Zelenskiy said of Yovanovitch: "the woman was bad news and the people she was dealing with in Ukraine were bad news." Zelenskiy agreed she was a "bad ambassador" and agreed to investigate the Bidens.

The conversation occurred after Trump withheld $391 million in security assistance to Ukraine as it faced Russia-backed separatists in the eastern part of the country.

"Although I understand that I served at the pleasure of the president, I was nevertheless incredulous that the US government chose to remove an Ambassador based, as best as I can tell, on unfounded and false claims by people with clearly questionable motives," Yovanovitch said in her statement.

Yovanovitch, who entered the Capitol complex for the deposition wearing dark glasses, did not respond to questions.

Yovanovitch has worked under both Republican and Democratic administrations and has had support from members of both parties in Congress. A senior Republican congressional aide described her as someone widely viewed as "professional."

Democrats have accused Trump of pressuring vulnerable ally Ukraine to dig up dirt on a rival for his own political benefit. Biden is a leading Democratic contender seeking his party's nomination to face Trump in the 2020 presidential election. Trump has denied wrongdoing.

Democrats have also criticized the Trump administration for what they see as efforts to obstruct the investigation. After Yovanovitch's testimony, House Intelligence Committee Chairman Adam Schiff warned that interfering in the probe would show "the president is violating the constitutional separation of powers and seeking to cover up his misconduct."

He said Yovanovitch had been "a model diplomat and deserves better than the shabby treatment she received from the president and the Secretary of State."

As Yovanovitch spoke to the House Foreign Affairs, Intelligence and Oversight committees, Secretary of State Mike Pompeo insisted that the administration would comply with the law.

"We're going to do everything we're lawfully required to do," Pompeo said in an interview with WKRN-TV in Nashville.

The investigation could lead to the approval of articles of impeachment - or formal charges against the president - in the House. A trial on whether to remove Trump from office would then be held in the Senate, where Trump's fellow Republicans who control the chamber have shown little appetite for ousting him.

In a call with her fellow House Democrats on Friday afternoon, Speaker Nancy Pelosi said the investigation was about finding facts, not Trump's personality, although she said Trump "has become a potty mouth and children are listening."

"His policy, his personality, his potty-mouth, that's about the election," Pelosi said, according to an aide who was on the call. "The inquiry is because he has not honoured his oath of office. We will honour ours."

Trump had told a rally on Thursday that Biden "was only a good vice president because he knew how to kiss (former President) Barack Obama's ass."

"Today, we see the State Department attacked and hollowed out from within. State Department leadership, with Congress, needs to take action now to defend this great institution, and its thousands of loyal and effective employees," she said.

Gordon Sondland, the US ambassador to the European Union, will comply with a subpoena and testify on Thursday, his lawyers said, despite the White House policy against cooperation. But Sondland is not yet authorized to release documents the committees have sought, his lawyers said.