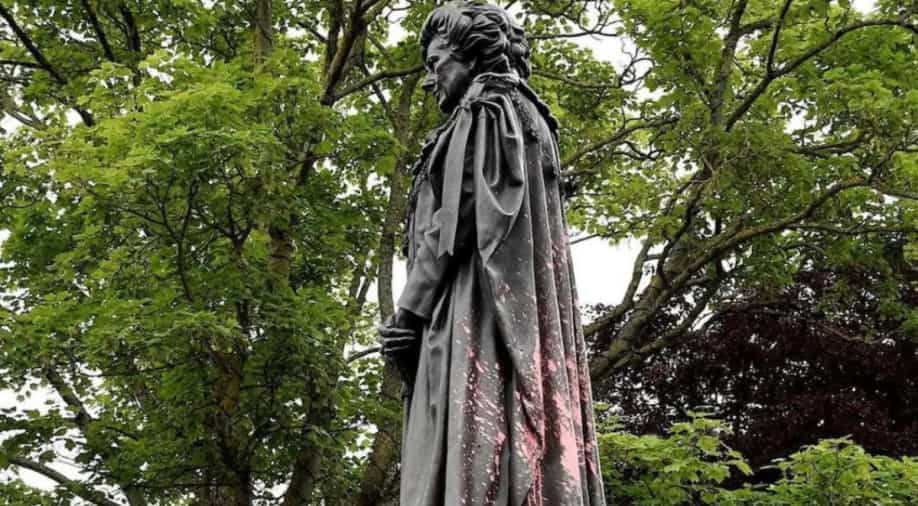 In this picture, red paint thrown on Margaret Thatcher's statue can be seen in Grantham, Lincolnshire Photograph:( Twitter )

Thatcher, who was the first British female premier, led the country from 1979 to 1990

Former British Prime Minister Margaret Thatcher's statue has been daubed with red paint by vandals weeks following an egg-throwing protest shortly after it was installed in her hometown.

Fences surrounding the monument have been sprayed with a hammer and sickle, a symbol used on communist flags to show solidarity.

The sculpture, located in Grantham, is worth $378,960 or £300,000 and was funded through donations raised by a British historical charity.

According to a spokesperson of Lincolnshire Police, ''Just before 11.15 pm yesterday, we received reports of a person shown on CCTV acting suspiciously near the site.''

''Officers attended and found graffiti had been spray-painted onto the barriers surrounding the statue, no damage was thought to have been caused to the statue itself.''

"This is being treated as criminal damage and an enquiry is ongoing," the spokesperson added.

Authorities in London had rejected a proposal to install the statue in a square opposite parliament over concerns about "potential vandalism and civil disorder".

But Thatcher's hometown Grantham in Lincolnshire in central England, where her father was a grocer, agreed to take the statue instead.

Also read | 'May the 4th be with you': Former British PM Margaret Thatcher's unique connection with Star Wars day

Thatcher, who was the first British female premier, led the country from 1979 to 1990. Also known as the Iron Lady, the Conservative prime minister confounded her own prediction that no women would win the job in her lifetime.

She continues to deeply divide opinion, nearly a decade after her death in 2013, due to her policies of privatisation, breaking the power of trade unions, and selling off public housing.

Although her statue sits atop a 10 feet high plinth under CCTV surveillance to minimise the risk of vandalism, it was lowered into place in St Peter's Hill earlier this month, despite warnings, it would be "egged" and draw boos from passing motorists.