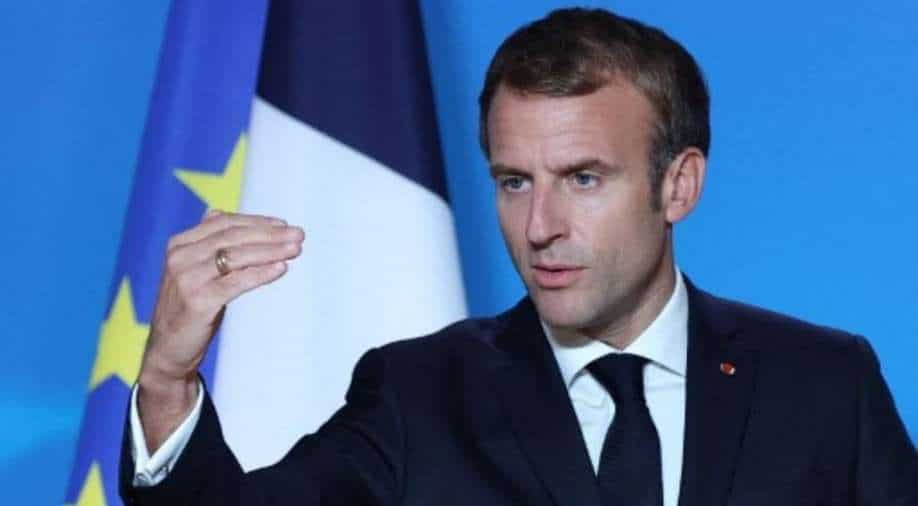 Macron was elected as a change agent five years ago with plans to disrupt the heavily unionized industrial sector that had stagnated, as owners feared the rising cost of French workers who were guaranteed years of ample benefits and were notoriously difficult to fire

During the last presidential campaign, the troubled Whirlpool factory in the northern city of Amiens became the setting for frantic, dueling appeals for support by Emmanuel Macron and his far-right rival, Marine Le Pen.

Macron promised to save the plant — which happens to be in his hometown — and once he was elected, his government poured millions in subsidies toward the factory’s reinvention as a showpiece of his commitment to reviving French industry.

As Macron seeks reelection, he and Le Pen are preparing to square off once again as the front-runners before the first round of voting in presidential elections Sunday. But the fate of the plant has proved much the opposite of what Macron had hoped for.

Today, the plant is an example of the difficulty of rehabilitating ailing French industries and of the president’s challenge in winning the confidence of French workers, who have been gravitating for years to the far-right.

The mammoth plant in Amiens, where weeds have pushed through asphalt and the cafeteria’s menu is frozen on sausage fricassee, is deserted and lifeless, except for three last Whirlpool workers who spend their days huddling around the coffee machines in a few small rooms.

The plant’s new operator was convicted in February of misuse of funds after a year of taking money from the government and Whirlpool and doing precious little with it. Workers say they spent idle days as next to nothing rolled off the assembly line. Instead, they kept busy killing time, taking extended cigarette breaks or lying inside their cars fidgeting on their smartphones.

“Two or three times, when someone important visited, we had to pretend to work or hide,” recalled Mariano Munoz, 49, who was in charge of janitorial services. “The welders welded all sorts of things and hammered away. One or two tinkered with a car. Me, I’d take the street cleaner and I’d sweep the entire parking lot.”

Macron was elected as a change agent five years ago with plans to disrupt the heavily unionized industrial sector that had stagnated, as owners feared the rising cost of French workers who were guaranteed years of ample benefits and were notoriously difficult to fire. For years, unemployment hovered chronically at 8% or more as the industrial sector atrophied.

Initially, Macron attempted to overhaul France’s economy by pushing through business-friendly changes, like cutting taxes, especially for the wealthy. In his first years as president, he took on some of France’s toughest unions, provoking the biggest strikes the country had seen in years as he revamped France’s voluminous labor code, making it easier to hire and fire workers.

But even as the overall economy has bounced back strongly from the pandemic, Macron’s efforts to reindustrialize France have proved decidedly mixed, economists say, as evidenced by the nation’s trade deficit of 84.7 billion euros, about $93 billion, last year — a record — as well as the plant in Amiens, which had made tumble dryers for Whirlpool and did not survive despite nearly 10 million euros in subsidies.

For Macron, the plant’s long, agonizing death has complicated every trip back to his hometown, about 80 miles north of Paris. It reinforced the impression of Macron, a former investment banker, as the president of the rich, someone cut off from ordinary French people — like the nearly 300 workers who lost their jobs when the plant finally did close in 2018.

Many of the laid-off workers went on to join the Yellow Vest movement, whose ranks were filled with working-class French struggling under high taxes and a lack of earning power, ushering in the biggest political crisis of Macron’s presidency.

Burned by the Yellow Vest protests, Macron’s government spent massively to offset the economic shock of the pandemic, and unemployment is now at its lowest in a decade. Still, it is service-sector jobs that have continued to increase, while industrial employment declines.

Thomas Grjebine, an economist at CEPII, a research center in Paris, said that the fate of the Amiens plant was “symptomatic” of the difficulties of reviving the industrial sector. “In fact, the government is somewhat powerless before the closings of plants,” Grjebine said. “But many promises are made during campaigns.”

During Macron’s campaign for the presidency in 2017, 11 days before the final vote, Macron met with union leaders in town, while Le Pen paid a surprise visit to the plant’s parking lot and was greeted warmly by striking employees — forcing a reluctant Macron to follow.

Heckled and jostled by the hostile crowd, Macron tried to catch up with Le Pen, whose party, then called the National Front, had won the department that includes Amiens in the first round of voting that year.

“You think it doesn’t hurt me in the gut that people vote for the National Front on my soil?” Macron said to the crowd. Later, he promised a “real Marshall Plan for the reindustrialization of our economically lost territories.”

Half a year after his election victory, that promise seemed in sight. A prominent local businessman, Nicolas Decayeux, was selected to take over the plant with a project to manufacture refrigerated lockers and small vehicles. He took on 162 of the 282 laid-off Whirlpool workers and received 2.6 million euros in subsidies from the government and 7.4 million euros from Whirlpool.

During a celebratory visit to the plant, Macron was accompanied by Decayeux. In a follow-up letter to Decayeux, the president wrote that the businessman’s “beautiful entrepreneurial project” would “contribute to our industrial recovery.”

“I really had stars in my eyes because here is a young president who wants to reform France,” recalled Decayeux, who named his company WN.

It was a rare piece of good news for Amiens, a picturesque town of more than 130,000 that straddles the Somme River.

Like much of northern France, it had been hit by deindustrialization for two generations as successive national governments considered a shift toward a consumer-driven economy a sign of modernization, witnessed in the Amazon warehouses that have opened in Amiens and elsewhere.

“This drop in social standing, the sentiment of being abandoned and of not mattering, eased the way for extremism,” said Brigitte Fouré, the center-right mayor of Amiens.

In an interview with a French magazine last year, Macron said that growing up in Amiens, he had witnessed the “full force of deindustrialization” in his region. Still, he acknowledged that he himself had enjoyed a sheltered upbringing, living in a “rather happy bubble, and even a bubble in a bubble.”

“He’s from Henriville, and when you say, ‘Henriville,’ it’s Versailles,” said M’hammed El Hiba, the longtime head of Alco, a community center in Amiens North, an area inhabited by the descendants of North Africans recruited to work in factories in the 1960s and 1970s.

“Nothing was happening,” said Christophe Beaugrand, 44, a welder who was hired by Decayeux after being laid off by Whirlpool. “People were in the cafeteria with their phones and chargers. When the prefect visited, we had to make noise or hide.”

Worried about the lack of activity, workers informed their national lawmaker, François Ruffin, and gave him a chicken made of steel as proof of their idleness.

Ruffin said he alerted the government but got no response until it was too late. Macron’s government, he said, appeared to have lost interest in the plant after Decayeux’s company took it over.

“It was as if everything was over on the day of the inauguration,” Ruffin said.

Eventually, the government looked closely at Decayeux’s company, WN, and pulled the plug. Without subsidies, the company shut down in July 2019, about a year after opening to great fanfare.

After an official inquiry and a trial, Decayeux was found guilty in February of awarding himself a 25,000-euro bonus, which he must repay; of using company funds to rent two apartments, one for himself and another for his girlfriend; and of hiring his son as a part-time sales representative.

Decayeux, who has appealed, said that he had become a scapegoat for a government that panicked and fatally cut subsidies before his business could take off. Although he acknowledged that the assembly line lay silent for most of the time, he said that WN had made 15 small vehicles and a few elevator shafts.

“Before the government, I’m nothing,” he said. “They crushed me.”

During his last visit to Amiens, in November, Macron met nine former Whirlpool workers. By then, the news had become even worse. A local furniture maker that had taken over the plant following WN’s collapse had also quickly gone out of business.

Macron described Decayeux as a “hunter of bonuses” and told the workers, “I was duped along with you.”

Some of Whirlpool’s former workers did not buy it.

“It’s all well and good that he did his mea culpa, but behind that, there are still people without jobs,” said Frédéric Chantrelle, 53, one of the last three Whirlpool workers still employed at the plant. A court ruled last year that the company had to rehire them because the factory was not closed for economic reasons.

In the otherwise abandoned 17-hectare facility, they punch in and walk through a labyrinth of dark and cold corridors to reach the few heated rooms where they spend their days.

“It’s like a ghost factory,” Chantrelle said. “It’s awe-inspiring, a big site like this emptied of everything.”