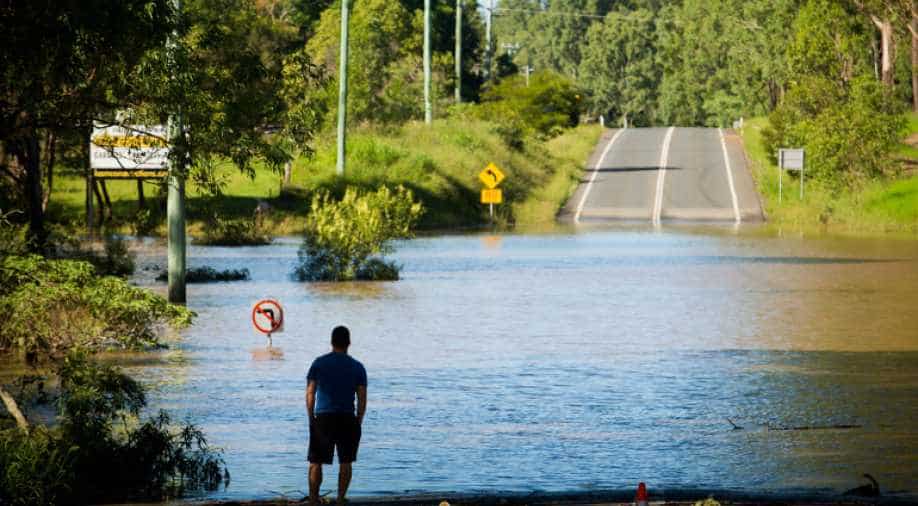 A resident looks at a road, submerged under floodwaters caused by Cyclone Debbie, in North MacLean, Brisbane. Photograph:( AFP )

At least two people were dead and several missing after torrential rain inundated large areas of Queensland and New South Wales (NSW) states, flooding homes and forcing the evacuation of tens of thousands of people.

Category four Cyclone Debbie smashed into Queensland on Tuesday between Bowen and Airlie, ripping up trees and causing widespread damage that is still being assessed.

It was downgraded to a tropical low as it tracked southeast through the week, packing high winds and dumping huge amounts of rain all down the east coast to Sydney before blowing out over the Tasman Sea.

Even as skies began to clear, numerous towns were still on flood alert and some regions remain under water.

Logan just south of Brisbane reflected the varied situation, with rising floods affecting some areas while other parts swung into clean-up mode as waters receded.

"This is unprecedented for us," Logan city mayor Luke Smith said Sunday, warning that his city was still "in flux" with one key river remaining at high levels.

"The sky is the limit at this stage about what that means," he added about the potential damage bill.

In Rockhampton in central-east Queensland, residents were bracing for the biggest floods they have experienced since 1954, with peak levels set to be reached late Wednesday or early Thursday.

"Debbie is not done with us yet," Queensland Premier Annastacia Palaszczuk said when visiting Rockhampton Saturday.

The bodies of two women were found in the state on Friday. Another three people were confirmed dead -- two in NSW and one in Queensland -- on Saturday but police were still investigating whether their deaths were flood-related.

"The water busted the door open and dad started to have a panic attack," the son of one of the victims, a 46-year-old man from Murwillumbah in northeastern NSW, told the Courier Mail newspaper.

"He fell down and it sounded like he was snoring, but he stopped breathing."

There were also fears for three other people missing in flood-affected areas in Queensland, with police searching for them Sunday.

Meanwhile, the military and emergency personnel were working to restore essential services such as water and electricity in towns that were in the direct path of Debbie in northern Queensland.

In cyclone-hit Proserpine, Colin Ridgway's home of two decades was destroyed by Debbie.

"Oh, it breaks your heart, really. But not much you can do about it. It's gone," he told the Australian Broadcasting Corporation Saturday.

The Insurance Council of Australia has declared the Queensland and northern NSW regions disaster zones, estimating the damage bill could reach Aus$1 billion (US $770 million).

"The devastation across our state is huge, it is going to take months to repair," Palaszczuk told reporters in Logan Sunday.