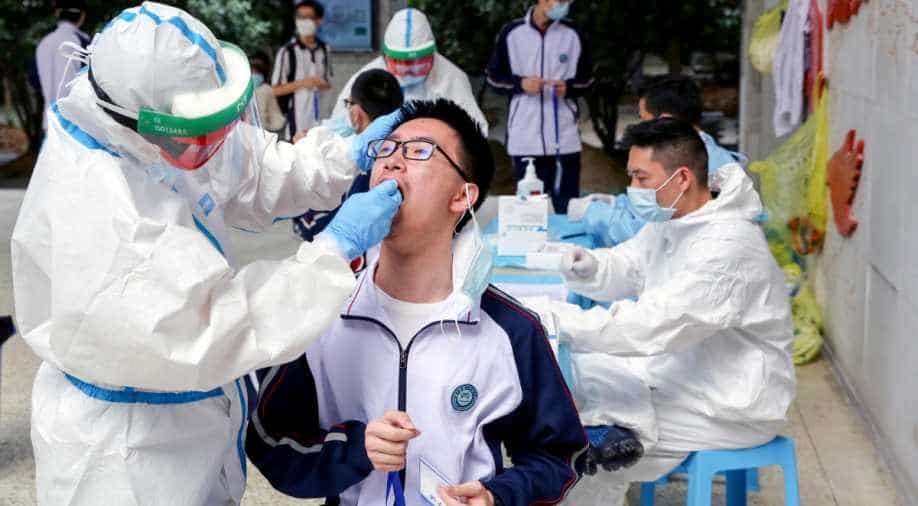 Beijing officials on Friday told residents to postpone weddings and keep funeral ceremonies short, as disease controls across China were tightened just months before the Winter Olympics kicks off in the capital.

The world's most populous nation has reduced infection numbers to a trickle since its initial epidemic last spring thanks to a zero-tolerance approach of border closures, targeted lockdowns and long quarantine periods.'

But China is now grappling with flare-ups in a dozen regions linked to tourists, spurring officials to order millions to stay home, restrict inter-provincial travel and ramp up testing.

Case numbers remain far lower than in most countries, with 48 new domestic infections on Friday bringing the tally to fewer than 250 in the past week.

But authorities are not taking any chances, with tens of thousands of people in Beijing -- which will host the Winter Olympics in February -- under lockdown after a handful of cases were detected.

Queues stretched down the roads outside Beijing's medical centres as people sought to comply with newly enhanced Covid controls.

Software developer Tu Anling, 24, told AFP she needed a test before being allowed to board a train to Nanjing, a city 1,000 kilometres (620 miles) to the south.

"I initially arranged to meet friends here (in Beijing), but the recent outbreak made many suddenly say they're not coming," she said.

Many regions are demanding passengers show a negative test before entering, especially those from cities that have recently reported cases.

Others told AFP they needed tests to sit academic or professional exams.

With Beijing officials keeping a wary eye on outbreaks in other parts of China, around half of all flights at the capital's two main airports were cancelled Friday, according to Chinese tracking platform Feichangzhun.

On Thursday rail authorities ordered two Beijing-bound high-speed trains to stop and sent over 450 passengers to be tested after staff members were identified as close contacts of infected people.

Fearful of outbreaks, a number of other cities have also strengthened Covid rules.

Authorities in Harbin -- the capital of the northeastern Heilongjiang province -- warned 10 million residents against outbound travel and grounded a third of flights at the city's airport.

About six million people are under lockdown across China including around four million in the northwestern city of Lanzhou and the Inner Mongolian county of Ejin, where around 35,000 people live.