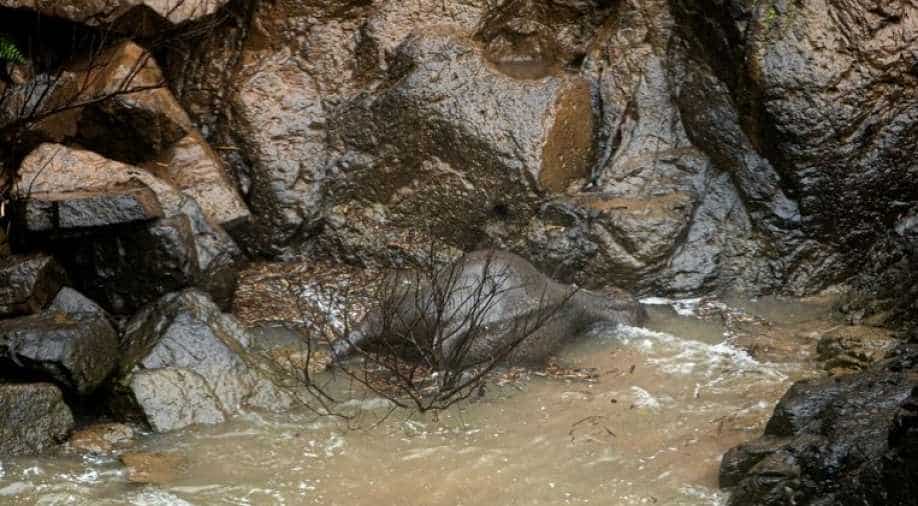 One of the Thai elephants that died in the waterfall plunge Photograph:( AFP )

The elephants were trying to cross the river at the top of the cliff on Saturday when a strong current swept them over the edge of the waterfalls.

Five more wild elephants in Thailand died in a plunge from the top of a waterfall, drone footage released on Tuesday showed, bringing the death toll to 11, including a three-year-old calf.

Only two elephants in the herd are known to have survived the fall at the 200-metre high Haew Narok Waterfall in a national park in Thailand's mountainous northeast, officials said.

The accident on Saturday is a setback to wildlife conservation in Thailand and happened at the same spot in Khao Yai National Park as a similar accident in 1992 that killed eight elephants.

The elephants were trying to cross the river at the top of the cliff on Saturday when a strong current swept them over the edge of the waterfalls, officials at the Department of National Parks, Wildlife and Plant Conservation said.

Wildlife officials sent small drones into the area to investigate because the terrain is too rough for hiking, Nattapong Sirichanam, governor of Nakhorn Nayok province adjacent to the mountains, told reporters on Tuesday.

"We flew drones at a height of 15 metres above the ground as we can't walk in to confirm the deaths," Nattapong said.

Analysis of the footage identified the bodies of five more elephants in addition to the six originally reported after the accident.

"We assume that there were 13 elephants in this herd and two of them survived. We are 100 per cent confident that two of them are alive as the officials saw them going out for food around the area of Haew Narok falls," Nattapong said.

Thailand has only about 3,500 to 3,700 wild elephants left nationwide, according to the Department of National Parks, Wildlife and Plant Conservation.

The 2,000 square km Kao Yai National Park is believed to have around 300 wild elephants as well as other wildlife. Now that two major accidents have occurred there, Nattapong said conservation officials are talking about building walkways over the falls or other solutions.

"We will try to find a way to prevent this kind of tragedy from happening again," he said.