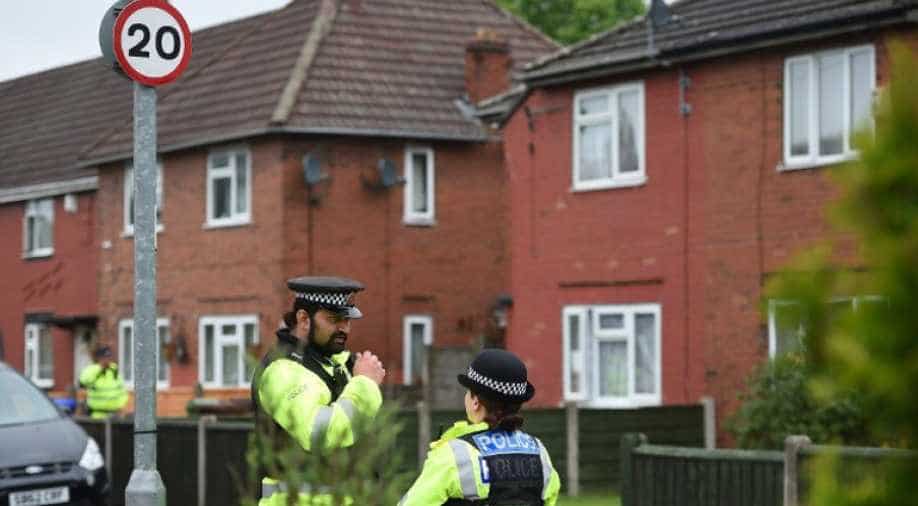 Police officers stand on duty outside a residential property on Elsmore Road in Fallowfield, Manchester as investigations continue into the terror attack at the Manchester Arena. Photograph:( Reuters )

British police arrested a man near Manchester on Wednesday in connection with Monday's terror attack, bringing to five the number of people arrested in the probe into the blast at a pop concert.

"We have made an arrest in Wigan this afternoon in connection with the investigation into the horrific incident at Manchester Arena," police said in a statement.

"When arrested, the man was carrying a package which we are currently assessing."

The brother of the man suspected of carrying out the bombing in the English city of Manchester has been arrested at the family home in the Libyan capital, a relative told AFP.

The source, asking not to be identified, said that Libyan intelligence services arrested Hashem Abedi, who like his older brother Salman was born in Britain, on Tuesday.

"The question is: Was he acting alone or was he part of a network of others who want to kill. That is what the investigation is focusing on," a source with knowledge of the probe told Reuters on condition of anonymity.

"The concern is that there may be others out there who helped him to make the bomb. Making a bomb of this sort requires a certain level of expertise and competence," the source said.

A second source told Reuters investigators suspect an accomplice helped Abedi build the bomb and then plot the attack.

Manchester Police Chief Constable Ian Hopkins told reporters it was very clear that they were investigating what he called "a network". He declined to give any further details on the investigation.

Meanwhile, Britain will hold a nationwide minute's silence at 1000 GMT on Thursday for the victims of the terror attack at a Manchester pop concert, the government said in a statement.

"The silence will be marked by all government buildings and other organisations may follow suit," said the statement on Wednesday, adding that flags would remain at half-mast until Thursday evening.

London has been the focus of additional security since an attack in March when Khalid Masood ploughed his car into people on Westminster Bridge leading to parliament, killing four before stabbing to death a policeman on guard at the building.

New barriers have been put outside Buckingham Palace and other high-profile sites. In parliament, armed police have become a more prominent fixture.

Some police officers outside London have long criticised what they see as the capital getting the lion's share of funding and personnel - feeling less of the brunt of the cuts than forces in other cities and towns.

Since 2012, Greater Manchester Police has seen a steady decline in its workforce, with the steepest fall last year. London's Metropolitan Police has also seen a contraction over that time but at a slower rate.

The death toll in the Manchester blast has gone up to 22 with at least 59 people injured. Police believe that it was a lone wolf who detonated himself at the entry point of the arena. Islamic State has said it orchestrated the attack (WION)