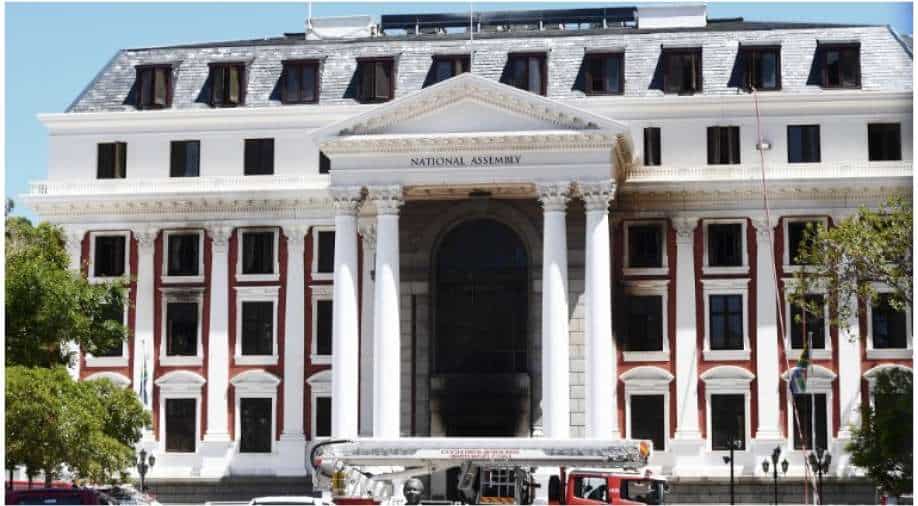 A general view of fire damage at the National Assembly, the main chamber of the South African Parliament buildings, in Cape Town on January 4, 2022 Photograph:( AFP )

The blaze began before sunrise on Sunday and was initially declared under control on Monday until strong winds reignited flames, leaving dozens of firefighters once again battling late into the night

Fire at South Africa's parliament, was contained on Tuesday (January 4) after intense efforts of two days. The fire devastated the complex and brought down roof of the National Assembly.

The blaze began before sunrise on Sunday and was initially declared under control on Monday until strong winds reignited flames, leaving dozens of firefighters once again battling late into the night.

A 49-year-old man was remanded into custody until January 11 during a brief court appearance on Tuesday. He was arrested on Sunday inside the parliament and has been charged by police with "housebreaking, arson" and damaging state property.

There were fresh flames again early Tuesday, he added, which firefighters extinguished.

"We currently have four fire engines on scene with approximately 20 staff members that will monitor the situation throughout the day."

No casualties have been reported in the fire, but the damage to the nation's parliament has shocked the country.

The blaze tore through the wooden room where MPs normally sit. Carelse said such was the devastation that a parliamentary session would not be held there for a long time.

Parliament spokesman Moloto Mothapo said "the entire chamber where the members sit... has burned down."

The fire started at around 5:00 am (0300 GMT) Sunday in the wood-panelled older part of the complex -- a section that once housed South Africa's first parliament.