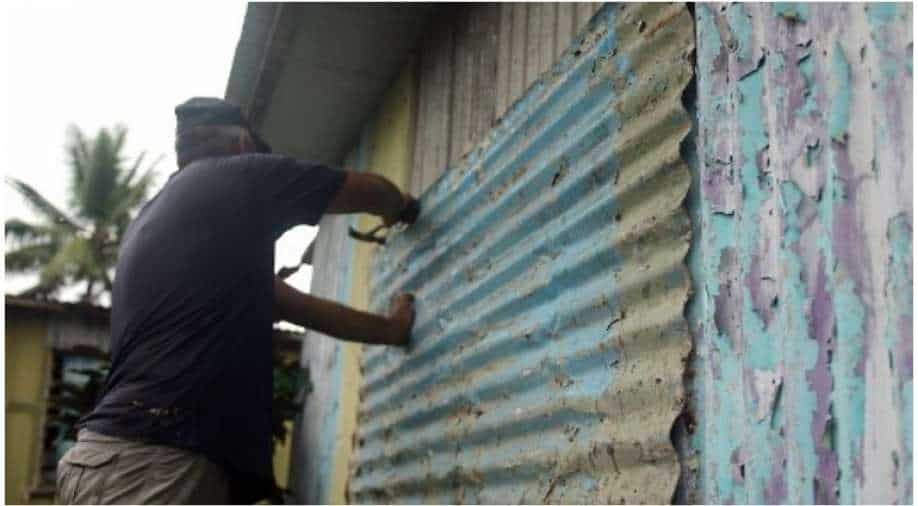 A resident secures his house by placing steel sheets on the windows in Fiji's capital city of Suva on December 16, 2020, ahead of super Cyclone Yasa. Photograph:( AFP )

Fijians living in the path of an approaching super cyclone Yasa were told to stay put inside their homes or immediately seek adequate shelter on Wednesday. The authorities have warned that the storm has the potential to destroy buildings and cause mass destruction.

The Fiji Meteorological Service said Cyclone Yasa had intensified to top-of-the scale Category Five storm the winds are expected to gust upto 280 kilometres per hour (174 miles per hour). Fiji's National Disaster Management Office said tow-thirds of Fiji's population of 900,000 is in the cyclone's path. Cyclone Yasa is expected to hit Fiji on Thursday.

National Disaster Management Office director Vasiti Soko urged anyone who doubted their home's structural integrity to prioritise survival over protecting their property and escape right away.

"If you need to move to an evacuation centre, we are pleading that you move before it gets dark," Soko said.

"If you know that your house cannot survive strong winds, let alone the cat five cyclone that is on the way, please take yourselves, your children and your valuables to the evacuation centre."

Soko said Cyclone Yasa was likely to have a larger impact than Cyclone Harold in April this year, another Category Five storm that gouged a trail of destruction across the Solomon Islands, Vanuatu, Fiji and Tonga.

In Fijian capital Suva, residents were boarding up their windows and storefronts

Fiji's military is on alert in order to carry out swift rescue and salvage efforts.

Category Five cyclones were once rare but have now become much common in Fiji.

Fijian Prime Minister Frank Bainimarama among those blaming the trend on climate change.

"We can see the eye (of Cyclone Yasa) and the area that's of concern -- it's not just part of Fiji like Harold, it's the whole of Fiji," Soko said.

She added that authorities were considering a curfew and movement restrictions, with Fiji's military on standby if needed.