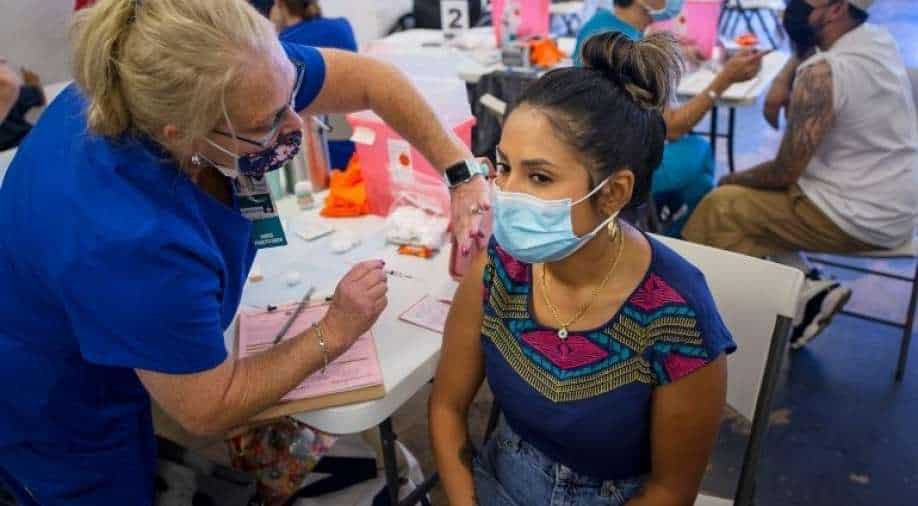 A key federal advisory committee was discussing Tuesday whether to recommend that a pediatric dose of the Pfizer-BioNTech coronavirus vaccine be offered to 5- to 11-year-olds, setting in motion a string of decisions that could lead to children getting shots as early as the end of next week.

Federal officials hope that the pediatric dose can help close a major gap in the US vaccine campaign that has worried parents, educators and public health leaders. If the Food and Drug Administration grants authorization, about 28 million children will become eligible. Only the youngest, those under 5, would remain uncovered.

Dr. Peter Marks, who heads the FDA division that oversees vaccines, said at the meeting that 1.9 million children aged 5 to 11 have been infected with the virus and more than 8,300 of them have been hospitalized, a third of whom needed intensive care. Nearly 100 have died, making COVID-19 one of the top 10 causes of death during the pandemic in this age group.

Children in this age range are “far from being spared from the harm of COVID-19,” he said.

Dr. Fiona Havers, a specialist in viral diseases at the Centers for Disease Control and Prevention, said that children in this age group make up 10.6% of all cases but only 8.7% of the population. Children have higher levels than adults of the neutralizing antibodies that are essential for preventing infection, she said, but are at least as likely as adults to be infected, she said.

Antibody tests of children also suggested there are many more virus cases than are publicly recorded, Havers said.

Hospitalization rates in the 5-11 age group are three times as high for Black, Hispanic or Native American children as for white children, she said. And more than 2,000 schools with a total of over 1 million students were forced to close between early August and October because of outbreaks, she said.

The committee’s recommendations on whether to authorize vaccines are not binding, but the FDA typically follows them in the days after the vote.

It is unclear how many parents would quickly vaccinate their elementary schoolers if given the chance. Polling has showed that roughly a third of these parents are eager to do so right away, while a third prefer to wait. Since federal regulators cleared Pfizer shots for children ages 12-15 in May, 46% of that age group has been fully vaccinated, compared with about 69% of those 18 and older.

An organized email campaign against giving the vaccine to younger children got underway over the weekend, with panel members deluged by messages urging to vote against recommending authorization, according to Dr. Paul Offit, a panelist who heads the Vaccine Education Center at Children’s Hospital of Philadelphia.

As of early Tuesday, nearly 140,000 public comments had been formally submitted to the agency on the issue. By contrast, only 66 comments were submitted before the panel recommended booster for adult recipients of the Moderna and Johnson & Johnson vaccines.

As the meeting began, Marks said: “I want to acknowledge the fact that there are strong feelings that have clearly been expressed by members of the public both for and against” authorization. He stressed that the only question before the experts was whether shots should be allowed, not whether to mandate them.

The dose for younger children would be one-third of the strength given to people 12 and older, with two shots given three weeks apart. Pfizer and BioNTech are asking the FDA to authorize distribution on an emergency basis.

The process may go more smoothly than when the vaccine manufacturers sought authorization of booster shots for adults — an issue that preoccupied and divided the agency’s regulators and its outside experts for much of the past two months.

Pfizer has provided the FDA with safety data on two study cohorts of children ages 5-11, both of roughly equal size. The first group was followed for about 2 months, the second for about 2 1/2 weeks. Pfizer cited efficacy data only for the first group of about 2,200 children, saying its vaccine had an efficacy rate of 91% against symptomatic COVID-19.

On Friday, FDA regulators said in an analysis of Pfizer’s pediatric trial data that the benefits of staving off COVID-19 with the vaccine generally outweighed the risks of the most worrisome side effects for young children.

Hong Yang, an FDA scientist, said in a presentation Tuesday that even in a scenario where infections nationwide are lower, the benefits of vaccination may outweigh the risks of possible side effects, since people hospitalized with COVID-19 tend to be sicker, and for longer, than those with certain heart conditions tied to the vaccine.

Regulators modelled scenarios that involved varying levels of spread of the virus, and assumed the rate of two rare vaccine-associated heart conditions would be the same in the younger children vaccinated with a one-third dose as in adolescents aged 12-15 who received a full dose.

Pfizer in its presentation to the committee Tuesday said it had worked to make the pediatric vaccines easily recognizable to health providers who would administer the shot. It changed the colour of the vial caps from purple to orange and also made the packaging of the children’s shot orange so that administrators could easily distinguish between those and adult versions.