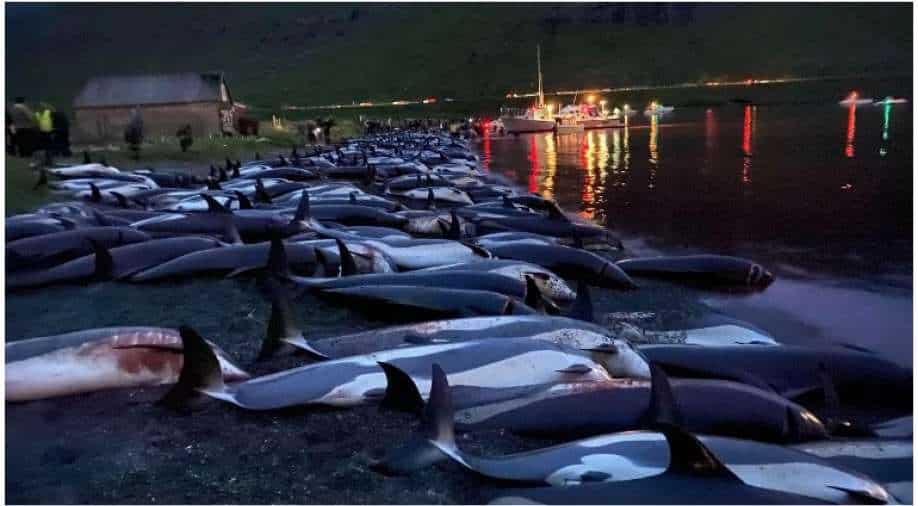 Dead Dolphons on the shores of Faroe Island in Denmark Photograph:( Twitter )

Every summer, images of the bloody hunt make headlines around the world and spark outrage among animal rights defenders who consider the practice barbaric

The Faroe Islands, a Danish autonomous territory, said on Tuesday that it had begun review to decide about the future of its traditional dolphin hunt. A decision is expected in coming weeks.

In the Faroese tradition known as "grindadrap", or "grind" for short, hunters surround dolphins or pilot whales with a wide semi-circle of fishing boats and drive them into a shallow bay where they are beached.

Fishermen on shore slaughter them with knives.

Every summer, images of the bloody hunt make headlines around the world and spark outrage among animal rights defenders who consider the practice barbaric.

A petition against this tradition that was signed by almost 1.3 people was submitted to to the Faroese government on Monday, the prime minister's office and whale conservation groups told AFP.

At a meeting on Tuesday in Torshavn, the government discussed the conclusions of a re-evaluation that Prime Minister Bardur a Steig Nielsen had ordered in September, after the unusually large slaughter of more than 1,400 Atlantic white-sided dolphins sparked an outcry.

"It was a first meeting. No decisions were taken," an official in the prime minister's office told AFP.

He added that a final decision was expected "in a few weeks", and "several options" were on the table.

the hunt still enjoys broad support in the Faroes, where supporters point out that the animals have fed the local population for centuries.
Normally, around 600 pilot whales are hunted every year in this way.

But the dolphin hunt on September 12, 2021 in the Skala fjord was much bigger, triggering an international outcry and pushing the government to reconsider the practice.

Only the dolphin hunt is currently being reviewed, not the entire "grind" tradition.