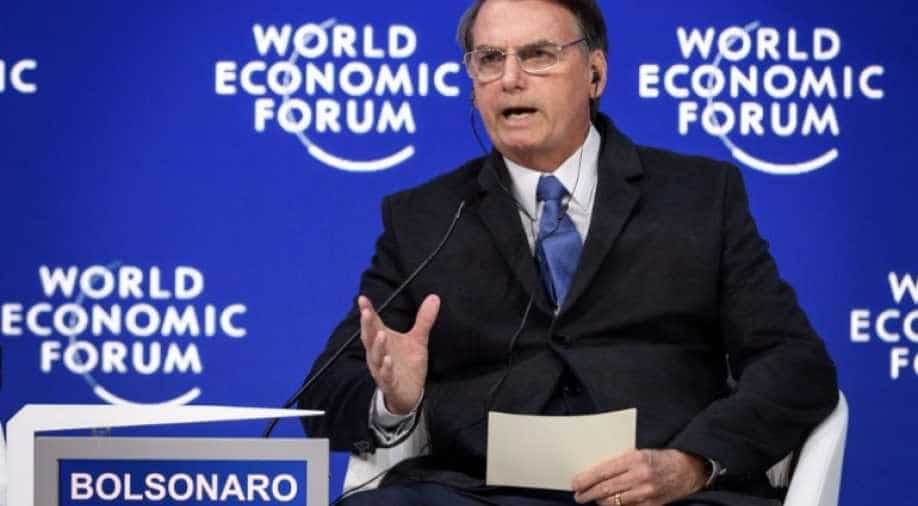 Jair Bolsonaro gave the keynote address at this year's World Economic Forum, where warnings are mounting of the dangers of a growth slowdown, yawning inequality and disastrous climate change.

Far-right President Jair Bolsonaro touted a "new Brazil" in a speech Tuesday to the world's business elite in Davos, vowing an investment-friendly agenda and attacking leftwing politics in Latin America.

The new leader of the region's biggest economy gave the keynote address at this year's World Economic Forum, where warnings are mounting of the dangers of a growth slowdown, yawning inequality and disastrous climate change.

US President Donald Trump along with the leaders of France, Britain and Zimbabwe have stayed away from the Swiss ski resort as they fight political fires back home.

A trip to Davos by US officials including Secretary of State Mike Pompeo was also cancelled by Trump. But Pompeo addressed the conference by video-link from Washington on a range of foreign-policy challenges, after Bolsonaro's speech.

Like Trump, Bolsonaro surfed a populist wave to ride to power, vowing an end to rampant corruption and restoration of law and order in Brazil.

But staging his first foreign trip as president, Bolsonaro has left behind a scandal about suspicious payments involving his politician son Flavio Bolsonaro, who denies any wrongdoing.

Focusing instead on a pro-business message at the WEF, Bolsonaro told his well-heeled audience that he was determined to open up Brazil's economy, slash red tape and lower taxes.

"I want to introduce to all of you the new Brazil we are building," he said. "We are committed to changing our history."

Addressing civil society's deep concerns over his authoritarian leanings, Bolsonaro said "true human rights" were safe under his government as it would protect the right to life and safety of property.

In a nod to Venezuela and other regional hotbeds of socialism, he also said the left wing would "not prevail" in Latin America.

And he insisted the natural environment was also safe, despite fears that the new government will open up the Amazon rainforest further to agribusiness and loggers.

The reaction to the speech was muted, with Davos-goers saying there was little to go by in the leader's short and sometimes stilted address.

"He's obviously very green from a policy point of view but maybe he won't be corrupt which would be such an improvement," Harvard professor Kenneth Rogoff, a former IMF chief economist, told AFP after the speech.

Trump of the Tropics

While Bolsonaro's promises on investment and deregulation have wowed the Brazilian stock market, he has also taken a page from the Trump playbook in bashing China.

Greenpeace executive director Jennifer Morgan said Bolsonaro should not have been afforded the "prestigious platform" of the WEF in Davos, "because I think it just buttresses that type of approach that he is taking".

It was up to the company bosses present in Davos to push back and "actually prioritise the Amazon and reducing deforestation over their short-term business interest", she told AFP, "because the Amazon is a fundamental part of how the whole planet works".

However, a new analysis by the World Resources Institute said the world is on course to miss its "best chance" of preventing runaway climate change, by ensuring global greenhouse gas emissions peak in 2020.

The WEF week features an eclectic lineup of discussions devoted to issues such as mindful parenting in the digital age, chronic loneliness and harnessing artificial intelligence without destroying jobs.

It is drawing some 3,000 political and business figures, including 65 government leaders from Germany, Israel and elsewhere.

Growth down, inequality up

Trump pulled out of Davos because of the partial US government shutdown and then yanked his entire delegation, removing any prospect of trade peacemaking in the Alps with Chinese Vice President Wang Qishan.

While economic growth is slowing, aid charity Oxfam warned the Davos elite that inequality around the world most certainly is not.

The wealth of the world's 26 richest people is now equivalent to that of the poorest half of humanity, Oxfam said, warning that such an imbalance was stoking popular anger and undermining democracies around the world.