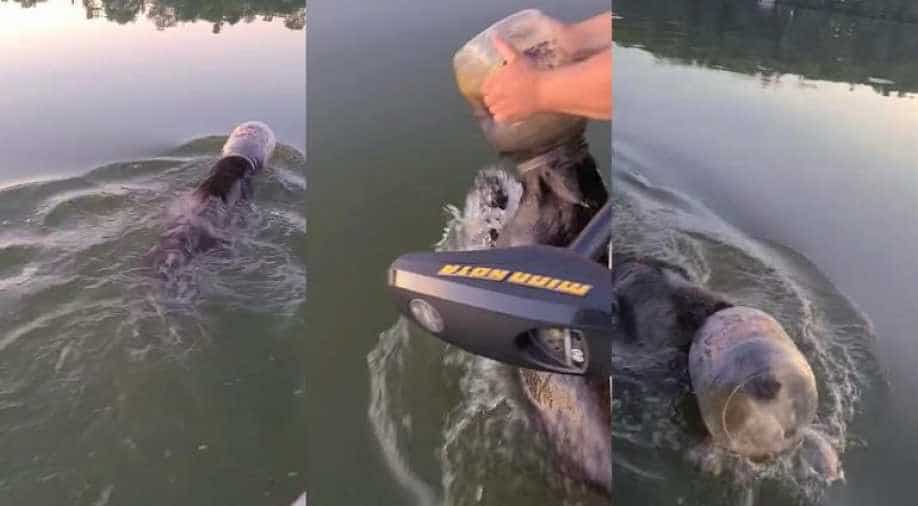 Collage showing the bear with jar stuck over his head Photograph:( Facebook )

Tricia Hurt, her husband Brian, and their son Brady were fishing when they spotted the animal swimming in the lake and decided to lend a helping hand.

A Wisconsin family was boating on Marshmiller Lake in Chippewa County, Wisconsin, over the weekend and stumbled across a small bear that was struggling to swim with what appeared to be a cheese ball jar stuck on its head.

Tricia Hurt, her husband Brian, and their son Brady were fishing when they spotted the animal swimming in the lake and decided to lend a helping hand.

"We knew that if we didn't do something, we are pretty sure it would not have made it to shore," Tricia Hurt told CNN. "It was really huffing and puffing, my husband said."

The Hurt family noticed something floating in the water when they were headed back to the boat landing after a day of fishing on Marsh-Miller Lake on Saturday,

26-year-old Brady Hurt thought it might be a rock, until he saw it move. While his father, Brian Hurt, , said it was probably a dog. It was his mother, Tricia Hurt who realized it was something more unusual.

"I said, 'That ain't no dog. I think that's a bear,'" Tricia Hurt told the Milwaukee Journal Sentinel. "We got closer and I said, 'Yeah, that's a bear that got hungry and got its head stuck in a bucket.'"

The young black bear was swimming across the lake struggling to breathe with a plastic cheese ball container around its head.

The Wisconsin Department of Natural Resources had been contacted several times but had been unable to locate it thanks to the rural, wooded landscape, Hurt said.

Since Hurt posted the video to her Facebook on Sunday, it has amassed almost 800,000 views.