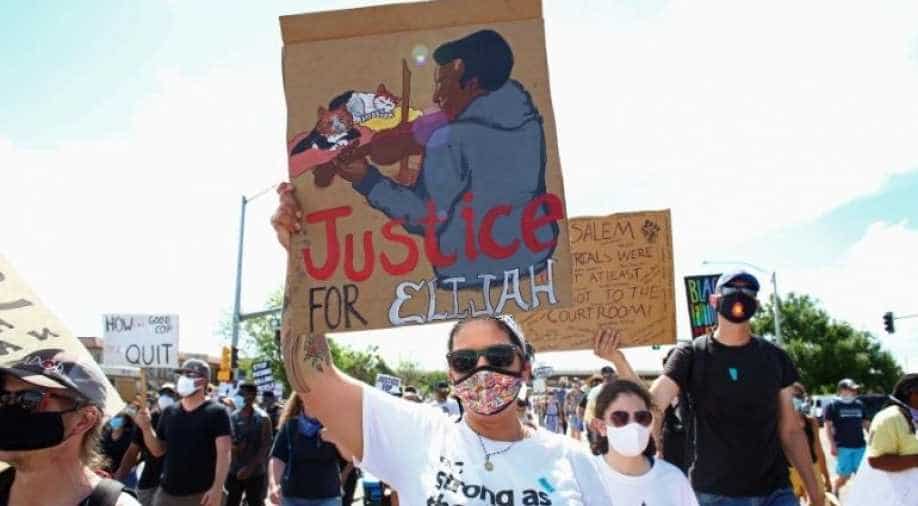 Caitlin Zotigh, who traveled from Loveland, CO, raises a sign she painted herself with an image of Elijah McClain doing something he often did while alive, playing a violin, during a march in protest against the death of McClain and police injustice in Au Photograph:( Reuters )

According to the complaint, the officers held him in two carotid holds around his neck, tackled him although he presented no physical threat

The family of a 23-year-old Black man who died after a violent encounter with Aurora, Colorado, police officers filed a civil rights lawsuit against the city and its police on Tuesday, alleging murder and routine use of excessive force against Black people.

The man, Elijah McClain, was walking on the street alone in August 2019 when he was stopped by three officers based on a report that he was "being suspicious."

According to the complaint, the officers held him in two carotid holds around his neck, tackled him although he presented no physical threat, and medics attending to him administered an overdose of the sedative ketamine which left him unconscious.

"Plaintiffs bring this action seeking both accountability for the profound loss of a beautiful soul, and to ensure that Elijah did not die in vain by sending a resounding message that racism and brutality have no place in American law enforcement," McClain's family wrote in the complaint.

A spokeswoman for Aurora said the city attorney's office was reviewing the complaint but had no immediate comment.

McClain's family maintains that he had committed no crime and was stopped unlawfully. Citing previous instances of Aurora police forcefully detaining Black people, they alleged that McClain's case was part of a pattern of racist policing.

The Colorado Attorney General's Office issued a statement on Tuesday confirming that it had launched a broad investigation of Aurora police department patterns and practices that might pose civil rights violations. The office is conducting a separate inquiry into McClain's death, it said.

The case drew renewed scrutiny and public ire in June as protesters against racial injustice and police brutality took to the streets across the United States after George Floyd, a Black man, died in Minneapolis when an officer knelt on his neck.

The officers' forceful restraint of McClain lasted 18 minutes, and he was handcuffed and on the ground for 15, the complaint said.

The officers have said McClain tried to take their guns, but there is no body camera footage supporting those statements, the complaint said.

The lawsuit also named Aurora Fire Rescue Department personnel as defendants, alleging that medics failed to care for McClain when they injected him with ketamine, which impaired his breathing. The complaint said McClain showed no signs of resisting when medics administered the sedative.

Three Aurora officers were fired and a fourth resigned last month after authorities found they shared photos of themselves re-enacting the chokehold near the site of the McClain encounter. One of the officers who detained McClain was among those fired.

The Justice Department said last month that it opened a civil rights probe of the incident last year. Colorado's governor appointed a special prosecutor to review the case in June.