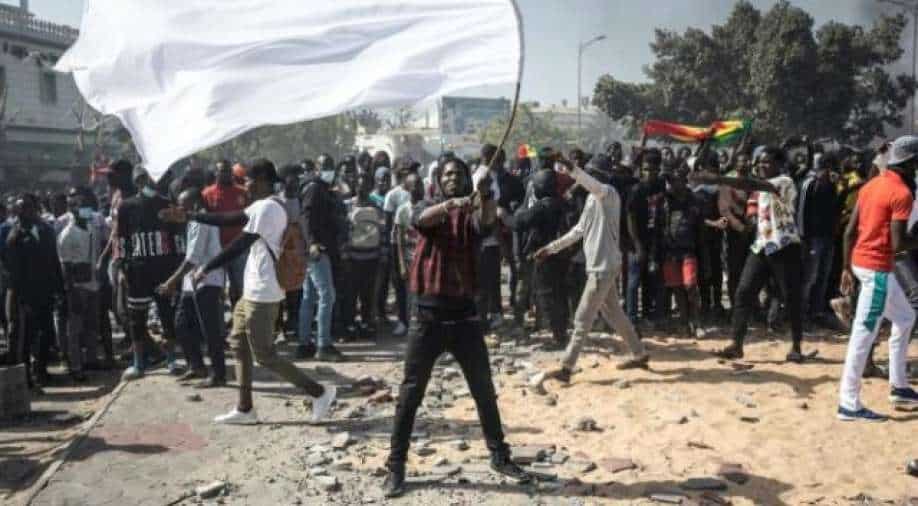 Usually seen as a haven of stability in a volatile part of the world, Senegal was rocked by days of clashes between opposition supporters and police in early March.

Senegalese students found themselves at the heart of deadly unrest in the West African country this month, venting long-simmering anger at poor living standards and bleak employment prospects.

Usually seen as a haven of stability in a volatile part of the world, Senegal was rocked by days of clashes between opposition supporters and police in early March.

At least five people were killed in the nationwide unrest -- although the opposition cites a higher death toll -- which was sparked by the arrest of opposition leader Ousmane Sonko, a government critic popular with young Senegalese.

In the seaside capital Dakar, violent clashes broke out on university campuses the day after the arrest, with hundreds of angry students hurling cinder blocks at riot police.

Some of the youngsters were Sonko supporters, but others interviewed by AFP said they were fed up with deficient teaching and a lack of jobs in the poor nation of 16 million people.

Lecturers often fail to show up, they said, while lecture halls and student housing are packed.

Employment prospects are also dire: Some 300,000 students graduate every year, according to Senegal's association for unemployed graduates, of whom only about 100,000 find work.

"It's all this accumulated frustration that boiled over," said Ndeye Fatou Ndoye, a 19-year-old management student, in Dakar.

"Young people died here for democracy," she added. "We want to be free".

Police arrested Sonko, a 46-year old devout Muslim, on March 3, after his supporters clashed with police as he made his way to a court appearance to face a separate charge of rape.

An employee at a beauty salon where he received massages accused him of rape the previous month, a charge he denies.

He was charged with disturbing the peace during the clashes on the way to the courthouse, and his arrest triggered the week of violence.

Protests following his arrest only abated on March 8 when a judge in Dakar released the opposition leader.

The judge also formally charged Sonko with rape, opening the possibility of a further investigation.

Not all students are staunch Sonko supporters, but many identify with his message of change, and his criticism of Senegal's governing elite.

"Young people are fed up," he said, explaining that Sonko understood their struggles.

UCAD, for example, shut for six months from last March in a bid to curb infections.

The move wreaked havoc on the academic calendar. Teaching began again in September, but the university has struggled to make up for missed classes.

"We're used to it now. In these cases, we revise and try to move forward alone, as best we can," said Coumbar, a second-year student.

"I'm not even sure we'll be able to finish the degree," she added, noting that finding a job afterwards was unlikely anyway.

Cheickh Mbaba Diop, a student member of Macky Sall's party, said that the president had tried to improve young people's lives but that the pandemic had "complicated things."

Last week, Sall said in a televised address that he understood young people's concerns, although he admitted that efforts to create jobs were "still insufficient".

Ibrahima, an English student at UCAD, told AFP that the poor job market, among other issues, meant students were well disposed towards Sonko.

The opposition leader is considered a strong contender to replace Sall in 2024 -- and is a vocal critic of perceived foreign economic exploitation in Senegal, especially from the former colonial power France.

Ibrahima likened Sonko's appeal to that of former US president Donald Trump: "It's a bit like Trump said: 'Make Senegal Great Again.'"