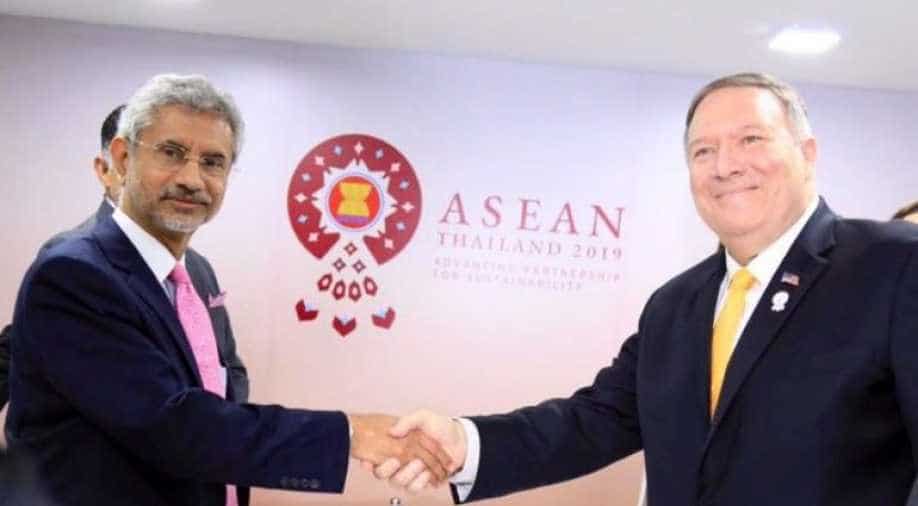 No readouts have been issued by New Delhi and Washington but both sides are expected to have discussed issues of concerns like trade and convergences like Indo Pacific.

No readouts have been issued by New Delhi and Washington but both sides are expected to have discussed issues of concerns like trade and convergences like Indo-Pacific.

The meet comes even as US President raked up Kashmir for the second time saying, "It’s really up to Prime Minister Modi (to accept the offer of mediation)."

Trump in response to a question said, "I think they are fantastic people - Khan and Modi - I mean. I would imagine they could get along very well, but if they wanted somebody to intervene, to help them. And I spoke with Pakistan about that and I spoke frankly in India about it."

Adding, "If I can, if they wanted me to, I would certainly intervene."

Ten days ago US President Donald Trump, while sitting next to Pakistani PM Imran Khan said PM Modi had called for mediation on Kashmir during Trump-Modi bilateral on the sidelines of Osaka G20 summit.

This was dismissed by the Indian side with EAM Jaishankar speaking in the Parliament saying all bilateral issues between India and Pakistan are governed by Shimla and Lahore agreements under which no third party mediation will be allowed.

Jaishankar is in Bangkok for the two-day summit (August 1 and 2) to participate in a number of ASEAN plus gatherings. Earlier on Friday, he participated at the 9th East Asia Summit Foreign Ministers' Meeting (EAS FMM) and will later participate at the 26th ASEAN Regional Forum (ARF).

Jaishankar will be going to China later this month for a preparatory visit for the 2nd India-China informal summit that will happen by the end of this year.