Exiled lawmaker: Hunger levels in Venezuela exceed those in countries at war 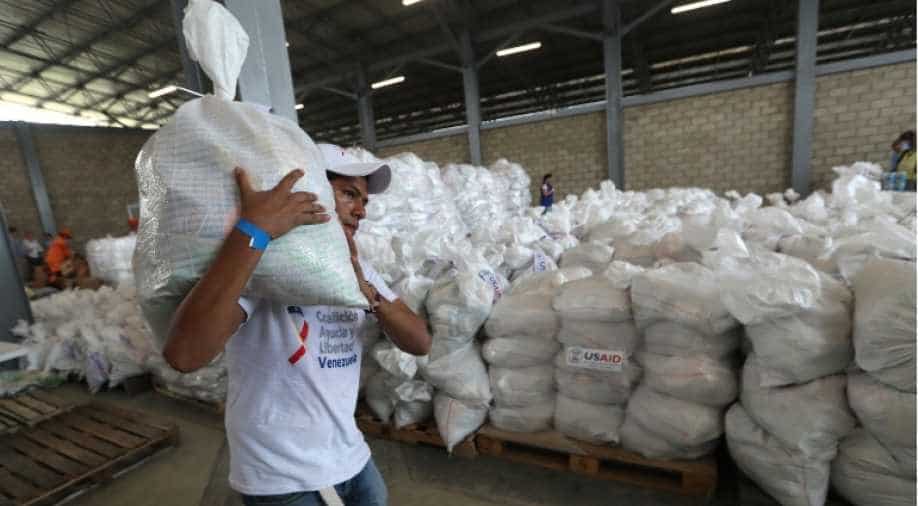 The first batch of aid arrived there on Thursday and, according to Arellano, tons more food aid will begin to flow in soon.

The crisis that Venezuela is going through has caused a famine on such a scale that it merits the immediate opening of a humanitarian aid corridor into the country, a young politician currently living in exile in neighbouring Colombia has said in an exclusive interview published by EFE on Monday.

The 33-year-old Gaby Arellano, who entered parliament three years ago, belongs to the same Voluntad Popular (Popular Will) political party as interim president Juan Guaidó and who had to go into exile in April, said that in her opinion the levels of hunger and privation in her country are as bad as those in countries at war or which have been hit by natural disasters.

"Unfortunately humanitarian corridors are activated in countries at war or with natural disasters, neither of which has happened in our country, but it really has to be initiated because the famine here exceeds that of many such countries," the exiled lawmaker told EFE in Cúcuta, across the border in Colombia.

More than 61 per cent of Venezuelans descended into poverty and lost more than 10 kilos in body weight in 2017, according to a Survey on Living Conditions (Encovi) carried out annually by the country's main universities and which was published last month.

Arellano had to flee into exile to avoid arrest for having backed a Supreme Court ruling stating that Maduro should be put on trial.

She is the lawmaker who has been entrusted by Guaidó, who has so far been recognized by some 40 countries as interim president of Venezuela, to receive international humanitarian aid in the border city of Cúcuta.

The first batch of aid arrived there on Thursday and, according to Arellano, tons more food aid will begin to flow in soon.

"We are working with two more countries that are to begin sending aid via Colombia and want to open other crossing points at our country's borders, not just here in Cúcuta," she said. "This town has the largest collection centre and has been prepared with facilities for coping with a process like this," she added.

Arellano said that Guaidó is to "make important announcements" on Tuesday on the entry of humanitarian aid into Venezuela and will explain "how and when."

Youth Day is to be celebrated then and Guaidó has called for the public to mobilize against Nicolás Maduro, whom he considers a "usurper" of the presidency, Arellano said.

Arellano added that dozens of volunteers were working at a collection centre on Tienditas bridge, a modern structure that unites Venezuela to Colombia which has yet to be opened by the Maduro government. She said that the regime has refused to receive aid because Maduro considers it to be a political show.

The bridge was inaugurated in 2016 but has remained unused due to constant border closures, local residents have told EFE.

"The usurping regime seeks, by every means, to misinform, demotivate and divide our efforts and president Guaidó works tirelessly to unite, to be consistent, to be responsible, to work on a strategy that will advance things at a steady pace," she said.

Arellano said she was convinced that it will be the people of Venezuela who will go out to tear down "the walls of the dictatorship," referring to two containers and a cistern truck that have been placed across Tienditas bridge to prevent its use.

"We are convinced that today there is an overwhelming need to trigger a popular mobilization," she said.

Arellano said that while Guaidó had popular and international support, he now just needs Venezuela's army, the Bolivarian National Armed Forces (FANB), to recognize him as their only commander in chief.

"There is a plan, there is a route, inside and outside the country, I think that has to be emphasized," she said.

She also criticized Maduro for saying that there was no crisis in his country, like for example when he gave a press conference on Friday at the Miraflores Palace presidential residence.

"What can there be left for the rest of the Venezuelan people if the lights go out during a live broadcast by Maduro in the Miraflores Palace," she asked. "That was a clear sign of the decay that exists in our country."