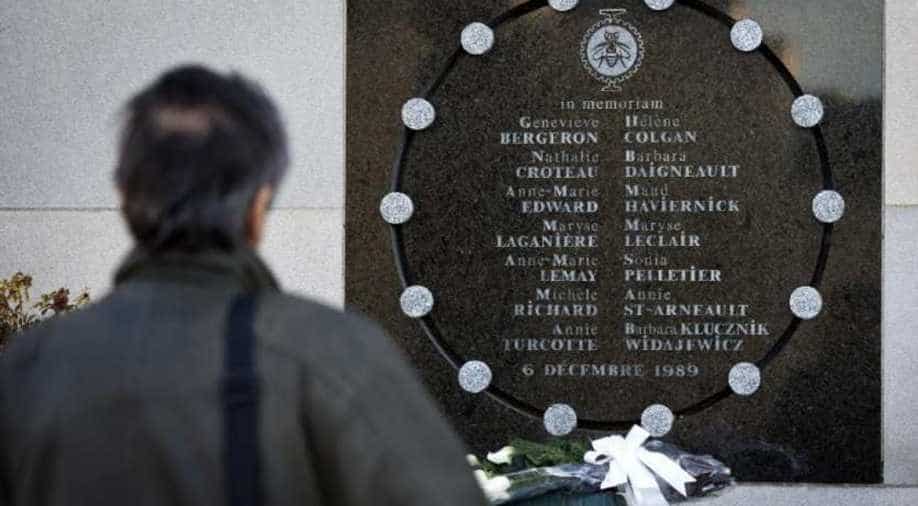 Canada marks its National Day of Remembrance and Action on Violence Against Women today, December 6. Photograph:( Others )

On December 6, 1989, a 25-year-old man entered a classroom in Montreal, Canada. He blamed feminism for ruining his life. Next, he physically separated the women from the men, then shot all the women. He shot 24 in total that day, killing 14. (Four men were injured in the crossfire, too.)

Since 1991, Canada has marked the day of the l'École Polytechnique de Montréal massacre each year. Hopefully, men reflect about what it really means. (Women already know.)

It’s easy to condemn violence against women when it’s in the form of an outright massacre and the motive, in case there was any doubt, is stated explicitly.

What do they live? It’s hard for men to know. Imagination is a bad substitute for lived experience, and statistics here are by definition incomplete since many attacks are unreported. But for my purposes, stats are unnecessary.

While certainty is impossible, consider: every man knows a woman who has been violated by a man. You might not know who they are, but you know them. An attack may haunt a woman’s life without her closest people even knowing it ever happened. Women around you are affected, whether you know it or not.

I know at least several female rape victims, both here in India and back in my native Canada.  It’s heartbreaking. Thankfully, I’ve never had a single male buddy tell me a woman violated him. It happens, and when it does it’s no less major, but men do not spend life worrying about being safe from women.

While I personally don’t know any male victims, I do know a man from high school who was arrested this year for murdering and torturing his girlfriend. He was 18 when I was 14, but was nice to me and made everyone around him laugh. It should come as a surprise to learn someone you know was raped or is a sadistic killer.

This is anecdotal, and the example is extreme. It's not a jumping off point for extrapolation, but I didn't cherry pick it either. It just happens to be my experience. While violence against women is far more common than the reverse, I don’t mean to reduce women’s lives to a constant attempt to evade horror at the hands of a man. Often we get along great!

Determining what percentage of men is dangerous is relevant to people more interested in defending Male Honour than female lives. Precaution is prudent, whatever the percentage. If a woman is at a party and only two of ten guys there are creeps, both things are true: most men are safe, but she is still in danger. Her safety, not a man’s perception of his gender’s worth, is what matters.

I suspect that many men vastly underestimate the threats women face. It can happen innocently enough. Why would a man, who has spent every day of life as a man, know how scary life can be as a woman? More women are bravely speaking out against this in public. It’s an important conversation. That, men aren’t listening enough is regrettable but profoundly unsurprising. It’s probably not from indifference or cruelty, just many things are vying for their attention and people select what to engage in based on what’s most pleasant, not most important.

Maybe some men are reluctant to believe women potentially face such terrible and prevalent threats because they feel implicated in it—guilt by gender association, no matter how blameless they are. People usually think favorably about their own. Country, gender, race, religion -- whatever. Believing women exaggerate is more comfortable than believing how dangerous your fellow men can be.

This reflection may sound like I’m bashing men. I’m not! I’m friends with many dudes! I’m only trying to shine a light on what some do to women. This conversation sometimes feels like it needs to be entered into on a declared side, Team Man or Team Woman. No!

I’ve written nothing radical here. Just be decent, and trust women when they talk about creepy or violent men. This topic is difficult and women need support now. It’s a hard time for many. Female Ghostbusters was a victory, then they got President Pussy Grabber.

So on this occasion that calls for remembrance and action on violence against women, men from Canada, India and everywhere should do what they can to consider how different life as a female can be, then treat women accordingly.