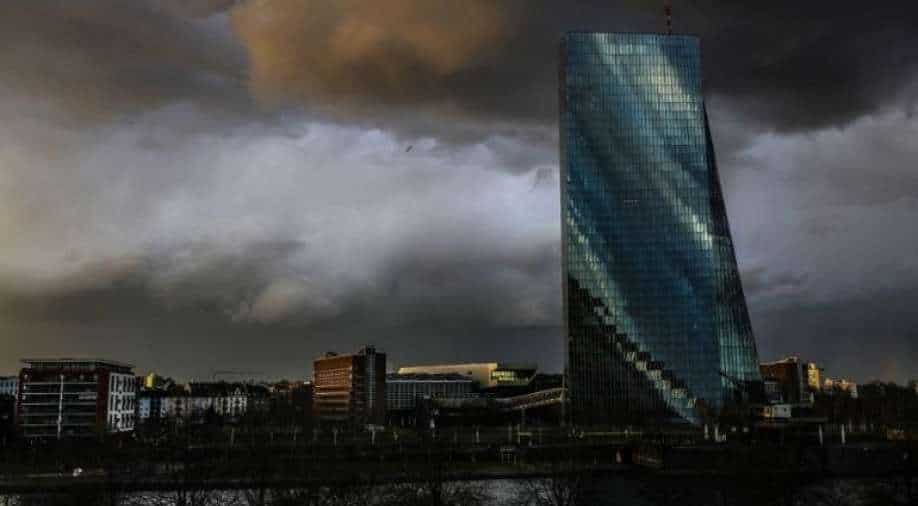 Eurozone. The headquarters of the European Central Bank (ECB) is pictured in Frankfurt am Main, western Germany, on March 11, 2021. Photograph:( AFP )

Europe has been hit hard by a second and third wave of the coronavirus pandemic, with multiple attempts to reopen the economy cut short by new outbreaks

The eurozone economy fell into a second recession in less than a year in the first quarter, data showed on Friday, as slow vaccinations and pandemic lockdowns stopped a rebound.

The data was in stark contrast to the US, where the economy roared forward in the same period, posting annualised growth of 6.4 per cent.

China has also turned the corner from the coronavirus pandemic with an 18.3-per cent explosion in gross domestic product growth on an annual basis.

Europe has been hit hard by a second and third wave of the coronavirus pandemic, with multiple attempts to reopen the economy cut short by new outbreaks.

More recent data has given Europeans confidence that the recession will be short-lived, however, with surveys showing that manufacturing is now booming.

And with the vaccination campaign finally getting into swing, pent-up demand is expected to follow as Europeans begin to spend more in shops, at reopened restaurants and on tourism.

The EU's slow-moving recovery plan is also expected to finally get on track, giving a much-needed boost to southern countries crushed by the pandemic, such as Italy or Spain.

Germany was the major drag on growth in January to March period, with exports unable to overcome a steep drop in demand by discouraged consumers, analysts said.

The eurozone's consumer prices meanwhile rose in April by 1.6 per cent, moving closer to the European Central Bank's (ECB) target of two per cent.

The rise in prices, again largely fuelled by energy costs, came after five months of inflation in negative territory at the end of 2020 and a gradual turnaround earlier this year.

But core inflation, which strips out volatile components such as energy or food, actually dipped in April meaning demand is not yet fully recharging the economy.

Unemployment has largely been spared the worst ravages of the crisis that were initially feared when the pandemic froze the global economy in early 2020.

Eurostat said eurozone unemployment dipped to 8.1 per cent in March, though this was one percentage point more than a year before.

EU-wide, unemployment slipped to 7.3 per cent in March.