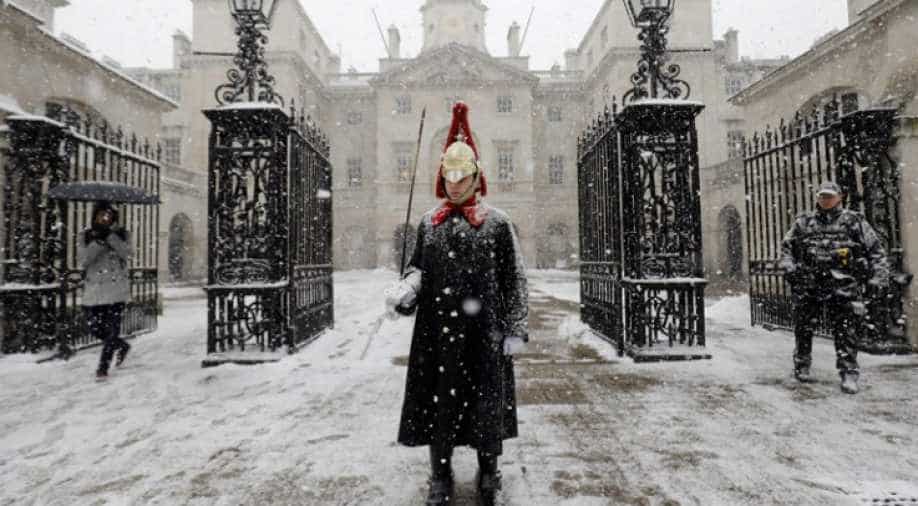 Snow falls on a member of the Household Cavalry Mounted Regiment, on Whitehall in central London. Photograph:( AFP )

Europe is bracing for a fresh bout of snowfall and blizzards as the brutal "beast from the East" continues to pound countries far north to the Mediterranean south.

Snowstorm from Siberia has thrown life in Britain and Ireland in complete disarray with flights grounded and people forced to stay indoors.

Reports said hundreds of people were trapped in their cars on the M80 motorway between Glasgow and Edinburgh. Flights and trains were cancelled across both Britain and Ireland.

London's busiest railway station, Waterloo, showed more than half of trains cancelled or delay at the height of rush hour.

Temperatures again plunged below -20 Celsius (-4 Fahrenheit) overnight in numerous parts of Europe -- even hitting -36C in Glattalp, 1,850 metres (6,000 feet) above sea level in the Swiss mountains.

Heavy snow enveloped northern Italy with train service disrupted across the region and in Paris, up to 5cm of snow was expected overnight on Wednesday.

Schools in Florence were ordered to shut, while heavy goods vehicles were banned from the roads in the north.

In the Netherlands, much of the problems were caused by strong wind. At Amsterdam's Schiphol airport, only two of the six landing strips could be used.