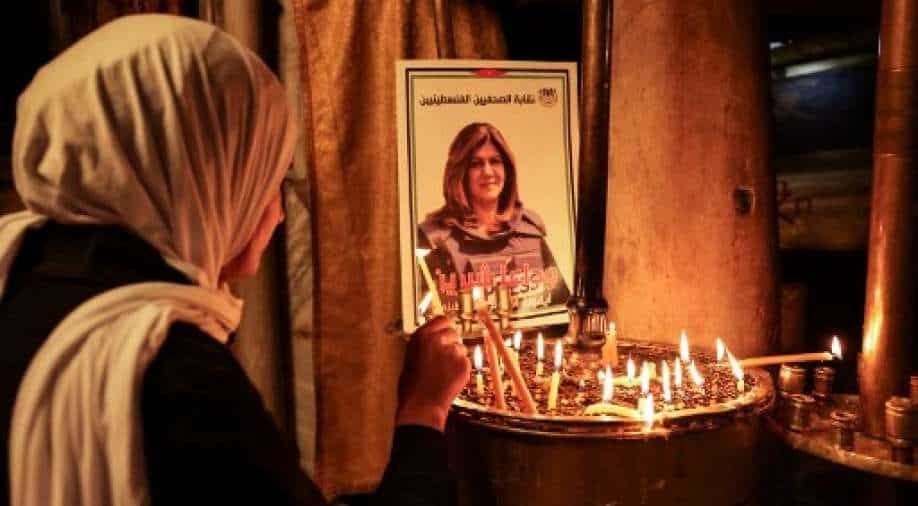 Calls mounted Wednesday for an independent investigation into the killing of veteran Al Jazeera journalist Shireen Abu Akleh, who was shot dead as she covered an Israeli army raid in the occupied West Bank.

The Qatar-based TV channel charged that Israeli forces deliberately and "in cold blood" shot Abu Akleh, 51, a Palestinian-American and a Christian, in the head during the unrest in the Jenin refugee camp.

Israel's Prime Minister Naftali Bennett said it was "likely" that "armed Palestinians -- who were indiscriminately firing at the time -- were responsible for the unfortunate death of the journalist".

Another Al Jazeera journalist, producer Ali al-Samudi, was wounded in the incident in which both wore helmets and vests marked "Press". He later said no Palestinian fighters were nearby, stressing that otherwise "we would not have gone into the area".

Defence Minister Benny Gantz later said that "the preliminary investigation conducted by the (army) in the last several hours indicate that no gunfire was directed at the journalist –- however, the investigation is ongoing."

Army chief Aviv Kohavi said, that "at this stage, it is not possible to determine the source of the gunfire which hit her".

The European Union urged an "independent" investigation into her death, while the United States' envoy to the UN, Linda Thomas-Greenfield, called for the killing to be "transparently investigated."

The office of the UN human rights chief Michelle Bachelet said it was "appalled", and also called for "an independent, transparent investigation."

Asked about Israel's openness to an international investigation, army spokesman Amnon Shefler said the military's internal investigative systems were "robust" and that it would conduct its own probe.

Shefler told reporters that Israel "would never deliberately target non-combatants," calling Abu Akleh's death "a tragedy that should not have occurred."

Israel has however publicly offered to participate in a joint investigation with the Palestinian Authority.

There were no immediate indications on whether the PA would agree to a joint probe.

Abu Akleh's body was in Ramallah on Wednesday evening, where thousands were carried her remains around the West Bank city, chanting "thank you, dear Shireen."

In a sign of her prominence in the West Bank, residents laid flowers on the roadside as the vehicle carrying her body moved towards Nablus, where an autopsy was conducted before her eventual burial in her native Jerusalem.

Al Jazeera said in a statement that "the Israeli occupation forces assassinated in cold blood Al Jazeera's correspondent in Palestine".

The Israeli army released a video showing Palestinian gunfire in the Jenin camp early Wednesday, but not in the precise spot where Abu Akleh was killed.

An AFP photographer reported that Israeli forces were firing in the area, and that he then saw Abu Akleh's body lying on the ground, with no Palestinian gunmen visible at the time.

The Israeli army has stepped up operations in Jenin, a historic flashpoint in the Israeli-Palestinian conflict, in recent weeks.

Several of the suspects blamed for deadly attacks on Israelis were from the area.

Witnesses in Jenin said Wednesday that the Israeli army had been targeting the home of an Islamist operative, with an apartment's heavy metal door blown off its hinges.

Majid Awais, a witness, told AFP that Abu Akleh "turned in panic" when she saw her colleague Samudi was shot, and that she was struck by the fatal bullet moments later.

Her death came nearly a year after an Israeli air strike destroyed a Gaza building that housed the offices of Al Jazeera and news agency AP.

Tensions have risen in recent months as Israel has grappled with a wave of attacks which has killed at least 18 people since March 22, including an Arab-Israeli police officer and two Ukrainians.

A total of 31 Palestinians and three Israeli Arabs have died during the same period, according to an AFP tally, among them perpetrators of attacks and those killed by Israeli security forces in West Bank operations.

The latest Palestinian death was an 18-year-old killed by Israeli troops during clashes near Ramallah on Wednesday. The army said its forces had used rubber bullets to suppress unrest.