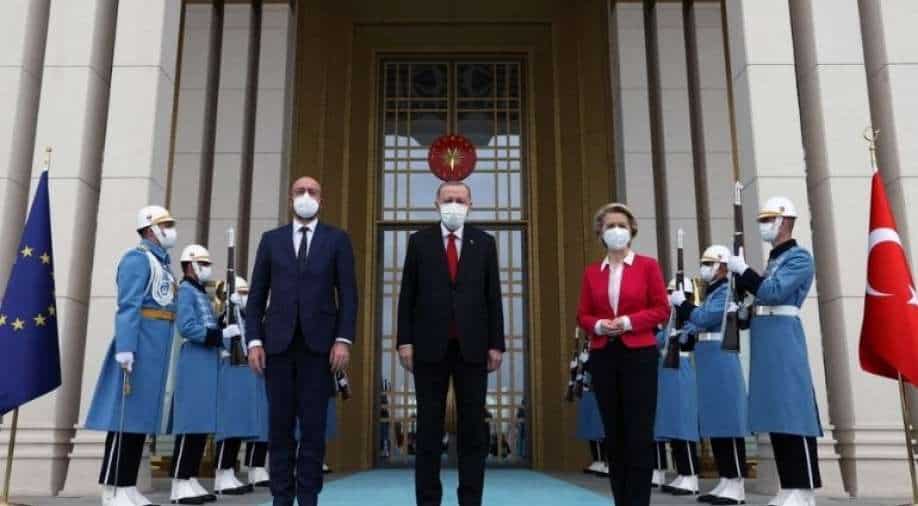 The visit is part of a relaunch of relations approved by EU leaders in March, after Turkey moved to calm a dispute over hydrocarbons in the eastern Mediterranean

The visit is part of a relaunch of relations approved by EU leaders in March, after Turkey moved to calm a dispute over hydrocarbons in the eastern Mediterranean.

European Commission President Ursula von der Leyen welcomed Ankara's change in stance on the eastern Mediterranean, but said the relationship between the bloc and aspiring member Turkey was still fragile, in part over human rights.

Turkey hosts some four million refugees, mostly Syrian, and has repeatedly accused the EU of not honouring its promises as per a 2016 migrant deal, under which it curbed migrant flows to Europe in exchange for financial aid.

Turkey is formally a candidate for EU membership, but its bid to join the 27-nation bloc has been at a standstill.

Von der Leyen also emphasised that Turkey must respect the rule of law and implement rulings by the European Court of Human Rights, voicing alarm over Turkey's withdrawal from the Istanbul Convention, aimed to protect women's rights, and other issues.

The visit by von der Leyen and Michel follows an EU summit last month at which the bloc said work could begin on deeper trade ties and on providing more money for refugees in Turkey, in a sign of improving ties after Erdogan took a constructive tone following months of tensions.

At the summit, the EU also warned Ankara of sanctions if it restarts energy exploration in disputed Mediterranean waters and voiced concern over Turkey's human rights record.

Both the EU and the United States have criticised a case to close Turkey's third biggest party, the pro-Kurdish Peoples' Democratic Party (HDP).

A row between Turkey and EU members Greece and Cyprus over energy resources and jurisdiction in the eastern Mediterranean has strained ties between the bloc and Ankara. Tensions flared in August when Turkish and Greek navy frigates escorted vessels exploring for hydrocarbons in disputed waters.

The European Union backs Athens, while Ankara has accused the bloc of bias.

Michel said the EU welcomed and supported the resumption of talks between Ankara and Athens over the decades-old dispute.

At last month's summit, the EU opened the door to begin modernising a Customs Union as Ankara has demanded. This would bring EU candidate Turkey into the internal market of the world's largest trading bloc and allow unhindered flow of goods and services.

While citing it as a strategic goal, Erdogan has downplayed EU membership in recent years amid increasing criticism from the bloc toward Ankara's foreign policy and human rights record, and the threat of EU sanctions.

The EU chiefs, who last held in-person talks with Erdogan a year ago, said they would cooperate with Ankara in three areas if the de-escalation continues, including improving economic ties, a formula to support refugees in Turkey, and ways to increase mobility