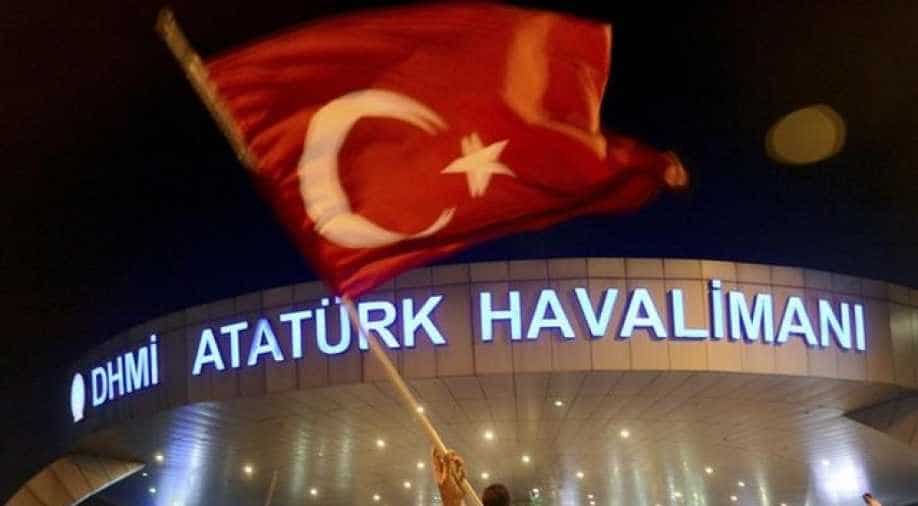 Since the failed coup last year (an image of a man waving the Turkish flag during the failed coup attempt), Turkish authorities have shut more than 130 media outlets and a press union says more than 150 journalists have been jailed. Photograph:( Reuters )

Turkish authorities have issued arrest warrants for the owner and three employees of an opposition newspaper, a police source and the paper said on Friday, part of a continuing media crackdown that has alarmed rights groups and Turkey's Western allies.

The four are accused of committing crimes on behalf of the network of US-based Muslim cleric Fethullah Gulen, they said. Gulen is blamed by Ankara for masterminding last July's failed coup against President Tayyip Erdogan, a charge he denies.

Turkish police carried out searches at the homes of the owner and the three employees of Sozcu newspaper, which is fiercely critical of Erdogan and his ruling AK Party, and also detained the paper's internet editor, the police source said.

The paper's owner is currently abroad, he added.

The state-run Anadolu news agency said the charges against the four suspects included planning "the assassination of the President and physical assault" and "armed rebellion against the government of the Turkish Republic".

Metin Yilmaz, editor-in-chief of the secularist, nationalist Sozcu, confirmed the police raids but denied the accusations, saying his paper had long criticised Gulen and his supporters.

"The only thing we do is journalism. But doing that in this country is a crime in itself," he said in a statement published on the paper's web site. "Writing the truth, criticising and doing stories are all crimes."

Since the failed coup, Turkish authorities have shut more than 130 media outlets and a press union says more than 150 journalists have been jailed, raising concerns about media freedom in a country that aspires to join the European Union.

The arrest warrants for Sozcu came days after a court jailed the online editor of another opposition newspaper Cumhuriyet, pending trial, on a charge of spreading terrorist propaganda.

Around a dozen journalists from the paper, long a pillar of Turkey's old secularist establishment, are already in jail facing sentences of up to 43 years in prison, accused of supporting Gulen's network.

Turkey has also suspended or dismissed more than 150,000 judges, teachers, police and civil servants and has arrested nearly 50,000 others suspected of links to the Gulen movement.

Turkish officials say the crackdown is necessary because the Gulen movement had set up a "state within a state" that threatened national security. They point to the gravity of last July's coup, when rogue troops commandeered warplanes to bomb parliament and used tanks to kill 240 people.

But Erdogan's critics in Turkey and abroad say he is using the coup to purge opponents and muzzle dissent. Last month he narrowly won a referendum that grants him sweeping new powers.