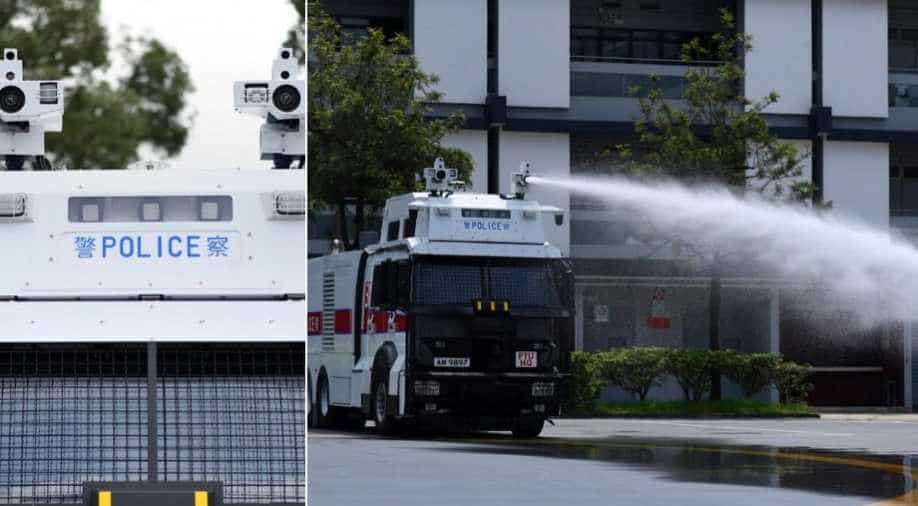 The brand-new vehicles were wheeled out after police clashed with demonstrators at nearly a dozen locations on Sunday.

The brand-new vehicles, complete with real-time surveillance cameras and multiple spray nozzles, were wheeled out after police clashed with demonstrators at nearly a dozen locations on Sunday.

They fired tear gas on shopping streets and in subway stations, with protesters hurling bricks and spraying riot police with fire extinguishers and water hoses.

Among them was a woman who suffered a serious face injury, reportedly after being hit by a bean bag round.

Images of her lying on the ground with blood pouring from her face quickly went viral and featured on posters calling for new demonstrations.

"An eye for an eye" read one call for a protest on Monday afternoon at the city's airport.

Police have defended themselves as accusations of using excessive force against protesters and on Monday unveiled two water cannons -- a method that has not yet been used during the crisis.

They demonstrated jets of water from the trucks on several dummy torsos placed at different distances from the vehicles.

Hong Kong has reportedly ordered three of the vehicles at a cost of HK$27 million ($3.4 million), though police declined to confirm the exact price-tag.

Police would only use the trucks in the event of a "large-scale public disturbance" leading to "casualties, property being destroyed wantonly, or public order and public safety coming under grave threat", senior superintendent Chan Kin-kwok told lawmakers.

The vehicles are "one of our options for our use of force or special tactics," he added during the Monday presentation.

Pro-democracy lawmakers attended the presentation holding signs that read "HK Police Murderers" and quarrelled with pro-Beijing lawmakers, who praised the police for their response to the demonstrations.

"We saw recently that the police's control of their emotions is extremely poor," said Lam Cheuk-ting, who accused police of having "abused their power to attack many protesters who aren't resisting".

It was the tenth consecutive weekend that protesters have taken to the streets in a movement that began over opposition to a bill allowing extradition to mainland China.

The protests have morphed into a broader bid to reverse a slide of democratic freedoms in the southern Chinese city.

They have been seen as the biggest threat to Beijing's rule since Britain handed Hong Kong over in 1997.

Mainland authorities have harshly condemned the demonstrators and Hong Kong's flagship carrier Cathay Pacific has found itself caught in the crossfire.

China's aviation regulator has issued new rules requiring that it submit lists of staff flying to the mainland or through its airspace and banning those involved with "illegal protests" in Hong Kong.

Cathay Pacific said it was obliged to comply with the new rules, citing the mainland's importance to its operations.

The airline has also found itself the target of a boycott call by mainland residents.

It has struggled to find middle ground after one of its pilots was arrested for rioting over his alleged participation in a Hong Kong protest.

The pilot has been suspended, and the airline has also fired two ground staff, reportedly after they leaked information on a Hong Kong police football team that was travelling to the mainland.

On Monday, the airline's chief executive Rupert Hogg warned staff in a message that they would face "disciplinary consequences" including being fired if they participated in or supported "illegal protests."