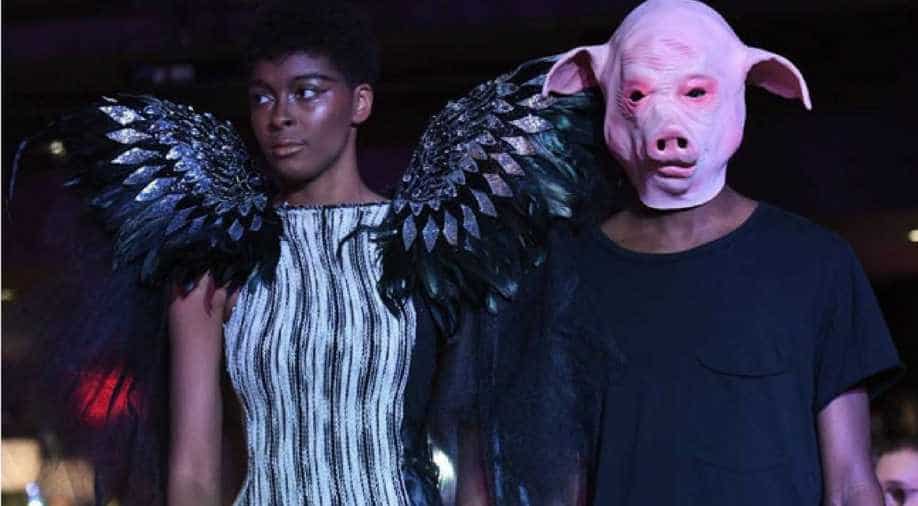 New York Fashion Week on Friday saw something never-seen-before when women models dressed as angels walked handcuffed to men with a pig-face mask on the catwalk.

Friday's fashion show was inspired by the #MeToo social media campaign aimed at exposing sexual misconduct and misdemeanour across the world, specially targetted at cities in the United States.

The catwalk grabbed the attention of all when to everyone's surprise, models sporting angel wings walked handcuffed to men in scary masks. Models could be seen dressed in floor-length black and white gown for some monochromatic expression through clothes and leather wings on their shoulders.

At the end of the runway, a 22-year-old model Cheyenne Jacobs, declared herself as a survivor of sexual abuse while briefly explaining what happened to her at a tender age.

She said: "I would like to take this moment as a stand of my healing, how far I’ve grown and also to say that this is not only a movement, not just stories, but we’re real people who have gone through real things."

Myriam, while talking about it to Reuters said, “I don’t think this fashion show is going to change things overnight, but if it can be a step further then I guess I’ve done my part. A woman who has been empowered is a woman who is unstoppable."

She went ahead to add that although the clothes are all a part of American Wardrobe fashions, the event in itself is nonprofit.

Also Read: 'I was flat-out raped': Amy Schumer reveals being assaulted as a teenager

The #Metoo social media campaign has exposed a number of men across the world who had allegedly harassed women. The campaign had gone viral with several women and men coming forward to narrate their stories. Since October last year, hundreds of women have accused powerful men in business, politics, media and entertainment of sex abuse, joining the #MeToo social media movement that has shone a light on sexual assault and harassment in US life.