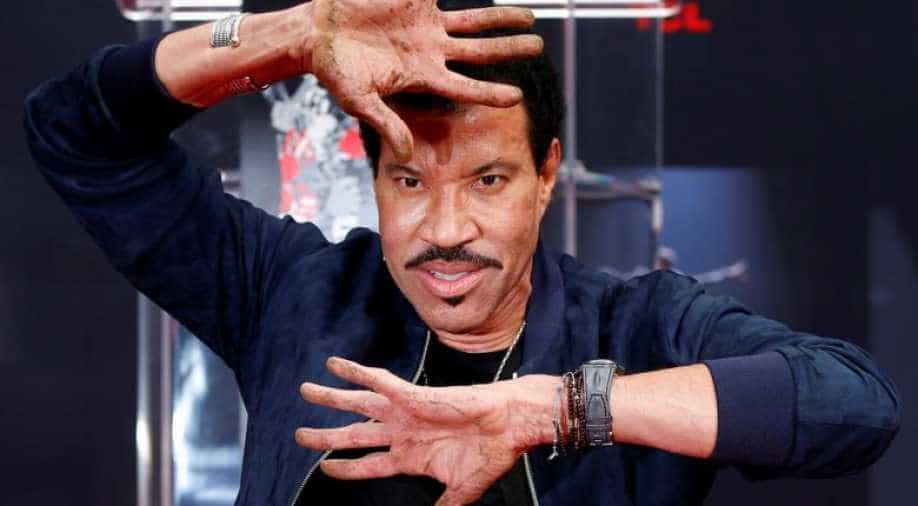 Recording artist Lionel Richie shows his hands after placing them in cement during a ceremony in the forecourt of the TCL Chinese Theatre in Los Angeles, California, US. Photograph:( Reuters )

Four-time Grammy winner Lionel Richie was honoured Wednesday as he plunged his feet and hands into a wet paving slab at the forecourt of TCL Chinese Theatre as part of a time-honoured tradition since the 1920s at Hollywood Boulevard.

The 68-year-old R&B singer, a former frontman for Motown legends 'The Commodores', cemented his legacy after having sold more than 100 million records over a career spanning six decades. Speaking to AFP on this, Lionel said, "This is almost beyond the childhood dream. When I first came to this town, the Holiday Inn was back there, right behind me, and the first thing I did was ran out the room, came downstairs and put my feet in all the hands and feet on the ground. Now, my hands and feet are going into this thing, it's almost beyond belief."

The ceremony was presented by Oscars host Jimmy Kimmel while veteran actor Samuel L. Jackson was on hand to support Richie, who told the crowd the honour was an "out of body experience."

Born as Lionel Brockman Richie Jr. on June 20, 1949, Lionel was raised on the private, Tuskegee Institute university campus in Alabama, where his family had worked for generations. As he gained interest in music, he joined the famed band and belted out hits for them including "Still," "Sail On," "Easy" and "Three Times a Lady," which earned a 1979 American Music Award and a People's Choice Award.

He later wrote "Lady" for Kenny Rogers and had a huge hit alongside Diana Ross with "Endless Love," which became the most successful single in Motown history, topping the US charts for nine weeks. Alongside Michael Jackson and Prince, he was one of the most successful male solo artists of the 1980s, with a run of 13 consecutive top ten hits in the US Billboard charts, five of them number ones.

He scored a major hit with "All Night Long," and won an Oscar for "Say You, Say Me," written for the film "White Nights." His Grammys include the 1985 Song of the Year prize for "We Are the World," co-written with Jackson.