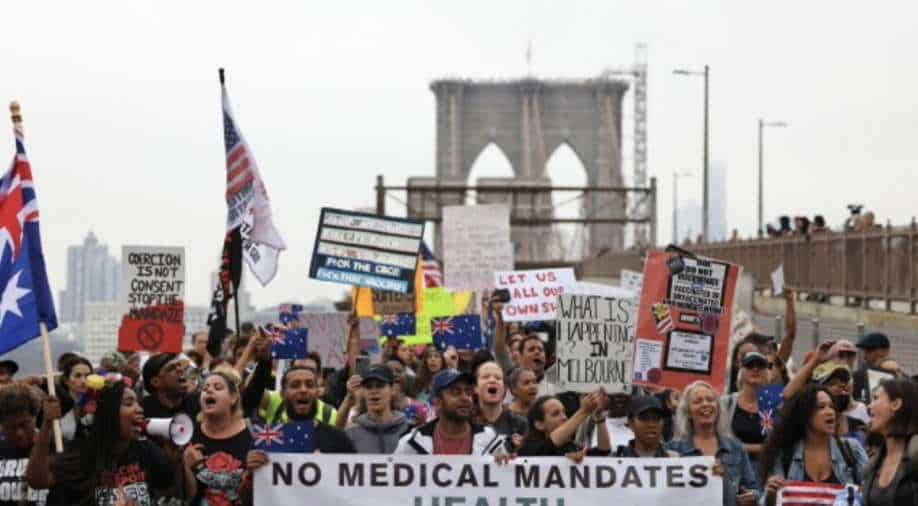 Most of the workers have less than a week to get their COVID-19 vaccines or go on unpaid leave. The protests turned violent when some demonstrators tried to break into the arena as they clashed with security and police.

NYC workers (fire, police, teachers) march in protest. Which city is next?? pic.twitter.com/o2zsiGjNnm

This comes in as last week, Mayor Bill de Blasio announced that regular COVID-19 testing would no longer be an option instead of vaccinations. he further said that the city employees, including first responders, would have until October 29 to get at least one dose of the vaccine.

Also read | 'With a heavy heart': Amnesty to shut Hong Kong offices due to security law

"It's time now. If you don't want to get vaccinated, you'll be put on unpaid leave. Well, the vast majority of human beings go to work to get paid. And also, I think for a lot of our first responders, there's a calling. They believe in the work, they care about the work. Those two factors I think are going to cause the vast majority to get vaccinated," Mayor de Blasio said.

He also offered a $500 incentive for city workers to get vaccinated. As a result of this, several unions are now demanding back pay for workers who already got vaccinated without a bonus.

The PBA has filed a lawsuit in Staten Island state Supreme Court seeking to overturn the vaccine mandate.

PBA President Pat Lynch said they are looking forward to filing a request for a temporary restraining order asking the court to bar the city and the NYPD from implementing the mandate, reports AP.