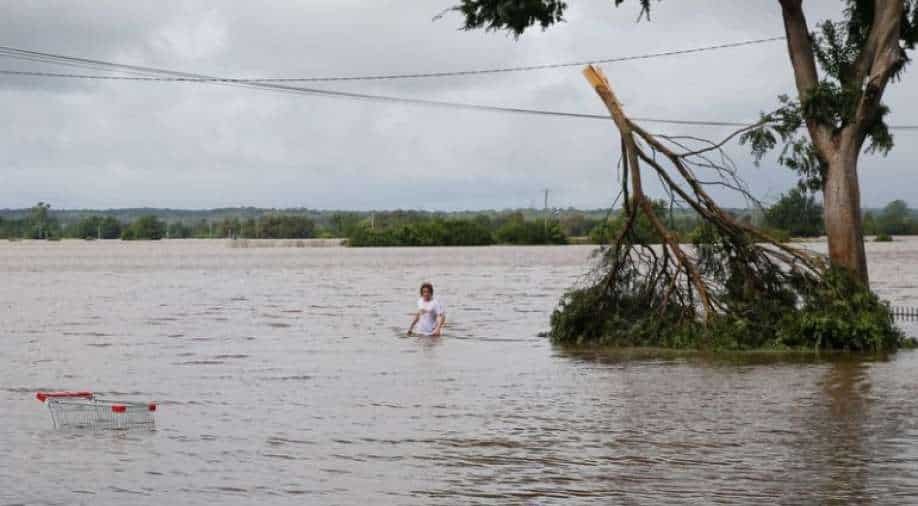 From Brisbane to Sydney, more than 30 evacuation warnings are in place and several dams are overflowing, with some near Sydney under threat of bursting

A week-long torrential downpour has swollen rivers and reservoirs past bursting point, causing chaos in an area 800 kilometres (500 miles) long.

From Brisbane to Sydney, more than 30 evacuation warnings are in place and several dams are overflowing, with some near Sydney under threat of bursting.

Terrified residents have sought refuge on higher ground, in make-shift evacuation centres, or by clambering into attics or onto rooftops praying for rescue by boat or helicopter.

In the hard-hit town of Lismore, Lucy Wise said the floods came much quicker and much higher than expected.

"The rain just wouldn't stop and the water was just coming up so fast" she told AFP.

She huddled at home as the waters rose through the night before grabbing her sleeping two-year-old son, cloaking him in a lifejacket and scrambling into the roof space of their house for safety.

"We were just lying there, silently, and the rain was just pouring down. I'd never heard such heavy rain in my life."

From outside neighbours watched as the house went under water.

"It was a few hours that I couldn't move. I could barely breathe. I was just taking it one breath at a time."

Wise and her family were eventually rescued by boat, but authorities say the floods have already claimed the lives of 13 others in Queensland and New South Wales.

The focus has now shifted to Sydney, Australia's largest city and home to more than five million people.

The Warragamba Dam, which supplies 80 percent of the city's water, began to spill over in the early hours of Wednesday.

Several western suburbs are under major flood and evacuation warnings, and authorities have told residents across the city to stop all "non-essential travel."

"There are quite a few hundred thousand people affected by these warnings that we are putting out now," said State Emergency Services commissioner Carlene York.

A La Nina weather pattern has caused Sydney to experience its wettest summer in 30 years.

Meteorologist Ben Domensino of @Weatherzone described the current storm system as an "atmospheric river" featuring a "long area of airborne moisture that is going in one direction."

"Despite decades of warnings from scientists about climate change, Australia is unprepared for the supercharged weather that it is now driving, such as the current floods," said environmental expert Hilary Bambrick of the Queensland University of Technology.

"Australia is at the forefront of severe climate change. Temperatures are rising faster in Australia than the global average, and higher temperatures mean the atmosphere holds more moisture, meaning rainfall events are becoming more extreme."

As the cleanup begins in northern areas which were hit first by the floods, many, like Mullumbimby resident Casey Whelan, predict a "long recovery" that could "take years."

Whelan fled his home as the flooding worsened, but as water levels stabilised he used a kayak that had floated by and a broomstick as an oar to return. He found it "just destroyed."

Water had risen up to the height of the kitchen bench, their furniture was submerged.

"I lost tools, I lost equipment, I have got farm machinery that's underwater. I didn't get it high enough. I guessed how high the flood was going to come and got gear up, but didn't get it up enough," he said.

"After a flood it could take months before things get back to normal. It's weeks even before you can walk around without, without sort of things being too wet underfoot."