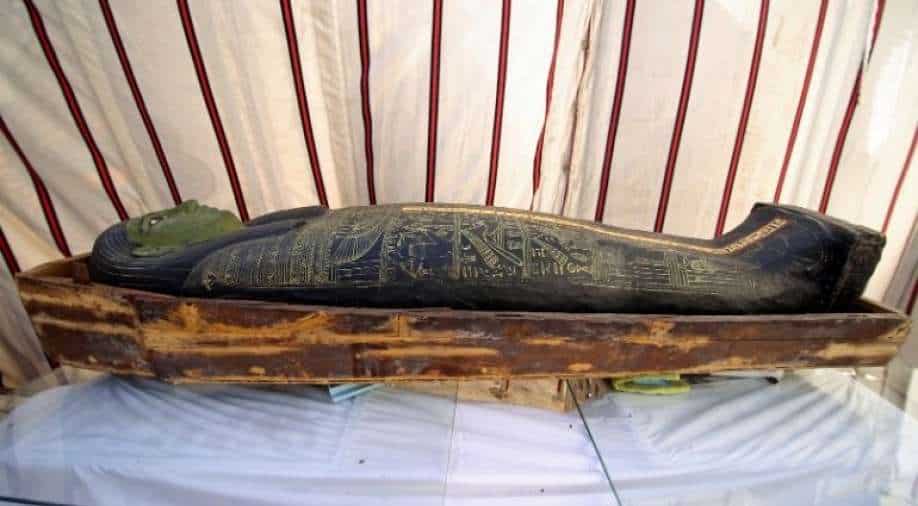 A coffin, part of a recent discovery from the Saqqara necropolis, is seen south of Cairo, Egypt January 17, 2021 Photograph:( Reuters )

The archaeologists have also found 52 burial shafts that comprise over 50 wooden coffins, or sarcophagi, that were about 3,000 years old

In another significant discovery, a funerary temple that dates back 4,200 years has been found along with 54 coffins in Egypt.

Archaeologist Zahi Hawass, who heads the excavation mission, said that the temple of Queen Neit was discovered near the pyramid of her husband King Teti, who was from Egypt's 6th dynasty which dates back 4,200 years at the Saqqara necropolis south of Cairo, reports news agency Reuters.

Egypt's Ministry of Antiquities on Sunday said that the archaeologists have found the temple and Teti's wife's burial pyramids with Queen Neit's name inscribed in a wall.

In Pics | Archaeological discovery in Egypt 'rewrites history' as we know it!

"I'd never heard of this queen before. Therefore, we add an important piece to Egyptian history about this queen," Hawass told CBS News.

The archaeologists have also found 52 burial shafts that comprise over 50 wooden coffins, or sarcophagi, that were about 3,000 years old.

For the unversed, Saqqara is a UNESCO world heritage site and is home to the Step Pyramid.

The coffins are carved in human form and pained in bright colours and many of these remain intact.

The antiquities ministry said that this is the first time that such old sarcophagi have been found.

Egypt is keen to display these newly discovered artefacts as they attempt to revive the tourism industry that was hit by the coronavirus pandemic.

Since September, at least 160 human coffins buried below the sand, in shafts up to 40 feet deep have been discovered, a report by Business Insider claimed.

With the latest findings, the total is now at least 210 coffins or more.

"All these discoveries will rewrite the history of Saqqara and the New Kingdom," said Hawass.