Ecuador President pardons some inmates to decongest jails after violence 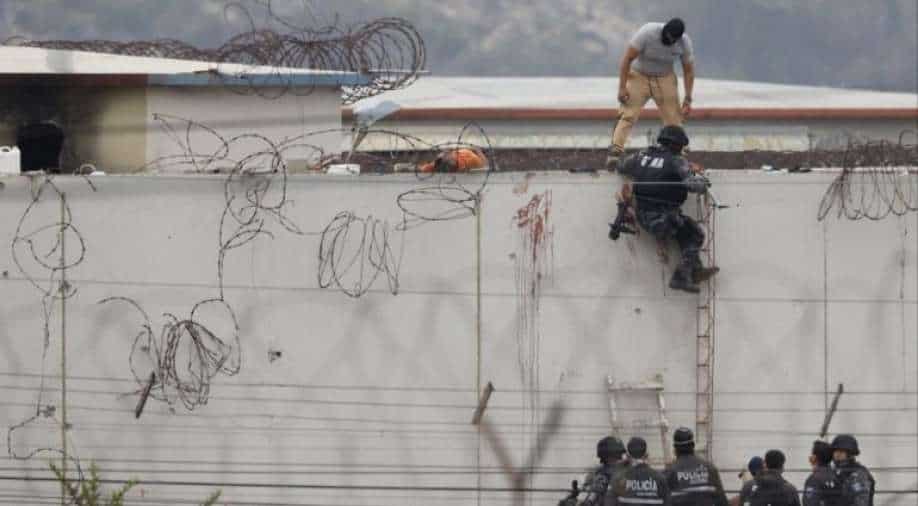 Members of the Ecuadorian police are seen next to the body of an inmate on the roof of a pavilion of the Guayas 1 prison in Guayaquil, Ecuador Photograph:( AFP )

To decongest overcrowding in jails, Ecuadoran President Guillermo Lasso on Monday granted pardon to prisoners with serious illnesses and those jailed for minor traffic violations.

The pardons have been granted to seriously or terminally ill prisoners and those involved in traffic offences that did not cause any casualty, the communications ministry said in a statement, without specifying how many would be released.

The move by the government follows growing incidents of prison violence in the country. Ecuador's prisons have been the scene of several massacres including a September riot — one of the worst in Latin American history —that left 119 inmates dead.

On November 14, at least 68 prisoners were killed during a fight between rival gangs at a prison in the Guayaquil city, with inmates attacking each other with guns, machetes and explosives.

On September 28, prisoners from one wing of the prison crawled through a hole to gain access to a different wing, where they attacked rival gang members. Hundreds of officers and army soldiers were deployed to regain control of the complex.

The deadly fight, which saw some inmates decapitated, drew attention to the growing influence in Ecuador of transnational crime gangs such as the Mexico-based Sinaloa and Jalisco New Generation cartels.

Nearly 300 inmates have died so far this year in the country's prisons, and September's gang-related violence was the worst in Ecuador's history.

In the Latin American country, there are over 65 prisons housing inmates more than their capacity. These jails have the capacity for 30,000 people, but around 39,000 inmates have been placed, including 15,000 who have not been sentenced.