Economy, conservative Islam in spotlight as Indonesia goes to the polls 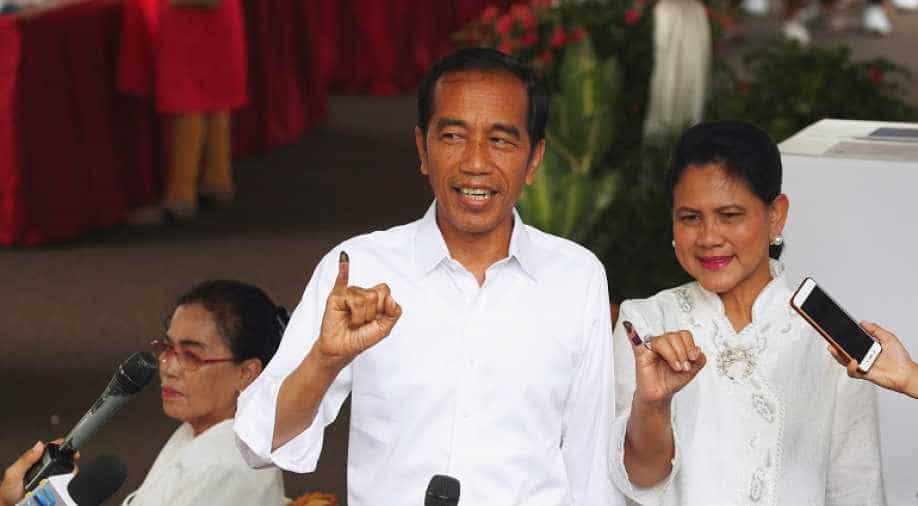 The eight-hour vote across a country that stretches more than 5,000 km (3,000 miles) from its western to eastern tips is both a Herculean logistical feat and testimony to the resilience of democracy two decades after authoritarianism was defeated.

Indonesians voted on Wednesday to pick a new president and parliament after a six-month campaign in the sprawling equatorial archipelago dominated by economic issues but also marked by the growing influence of conservative Islam.

The eight-hour vote across a country that stretches more than 5,000 km (3,000 miles) from its western to eastern tips is both a Herculean logistical feat and testimony to the resilience of democracy two decades after authoritarianism was defeated.

President Joko Widodo, a furniture businessman who entered politics 14 years ago as a small-city mayor, is seeking re-election against former general Prabowo Subianto, whom he narrowly defeated in the last election, in 2014.

Most opinion polls give Widodo a double-digit lead, but the opposition says the race is much closer and Prabowo, dressed in a white shirt and a traditional Indonesian peci cap, said before voting in Bogor he was optimistic about winning with a big margin.

President Widodo, dressed in a white shirt and accompanied by First Lady Iriana Widodo, voted in the capital.

"I feel relieved," said Widodo, after casting his ballot and displaying a finger dipped in indelible ink, part of the process of avoiding fraudulent voting.

More than 10,000 people have volunteered to crowd-source election results posted at polling stations in a real-time bid to thwart attempts at fraud.

However, the opposition has already alleged voter list irregularities that could affect millions and has vowed legal or "people power" action if its concerns are ignored.

Widodo’s running mate, Muslim cleric Ma'ruf Amin, called a for a peaceful vote "because the presidential election is not a war, but a search for the best leader", according to Kompas TV.

There was not much obvious security at polling stations in Jakarta, with volunteers helping direct people to voting booths.

The election is being billed as the world's biggest single-day vote and is certainly one of the most complicated, with voters contending with five paper ballots for president, vice president, and national and regional legislative candidates.

Some voters clearly struggled with the process.

"The ballots with the photos on it were actually confusing. And the other one had a lot of names I didn’t recognise," said Orlando Yudistira, 19, a first-time voter in Jakarta.

Another voter, Siti Suprapti, 85, said she had needed help to open the ballot "but I chose the candidates myself".

Dozens of volunteers and witnesses from political parties were present at polling stations to ensure transparency.

The country's election supervisory board has recommended a re-vote for Indonesians in Malaysia and in Australia, where several hundred registered voters were still standing in line after the polls closed there on Saturday. A decision will be taken by the elections commission.

An unexpected win for the challenger could trigger a brief sell-off in financial markets that have priced in a Widodo victory, analysts say.

"Should Prabowo win, this would literally be the end of opinion polling in Indonesia ... and a major, major upset," said Marcus Mietzner, associate professor at Australian National University. "The question is what the margin of victory will be," he said, predicting Widodo's re-election.

A win for Widodo with 52-55 per cent of the vote would be the "sweet spot" said a senior government official close to the president, adding that this would spur him to continue and even accelerate economic reforms.

Social media users compared the presidential race to the HBO series "Game of Thrones" - with one online meme showing Widodo sitting on its coveted Iron Throne.

Widodo touted his record on deregulation and improving infrastructure, calling it a first step to tackling inequality and poverty in Southeast Asia's biggest economy.

A moderate Muslim from central Java, Widodo had to burnish his Islamic credentials after smear campaigns and hoax stories accused him of being anti-Islam, a communist or too close to China, all politically damaging in Indonesia. He picked Islamic cleric Amin, 76, as his running mate.

Prabowo, a former special forces commander who has links to some hardline Islamist groups, and his running mate, business entrepreneur Sandiaga Uno, say they will boost the economy by slashing taxes and cut food prices.

Political analyst Dewi Fortuna Anwar said the "instrumentalisation" of religion had become much more visible in Indonesian politics in recent years with both candidates trying to appeal to conservative Islamic groups.

More than 192 million people are eligible to cast ballots in national and regional legislative elections being contested by more than 245,000 candidates.

"Moving from authoritarianism to democracy is a very difficult process but Indonesia has developed a good track record for holding free, fair and peaceful elections," said Ben Bland, an analyst at the Sydney-based Lowy Institute.

Unofficial "quick counts", based on samples from polling stations, will be released hours after voting ends. The winning presidential candidate could be known by late on Wednesday.

Official results will be announced in May. Any disputes can be taken to the Constitutional Court where a nine-judge panel will have 14 days to rule on them.