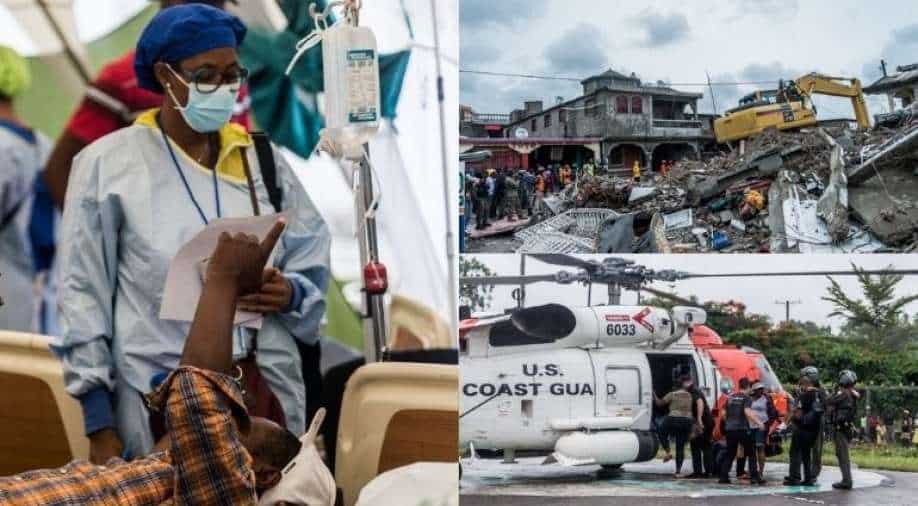 The latest disaster struck just weeks after President Jovenel Moise was assassinated on July 7, plunging the nation of 11 million people deeper into a political crisis that has worsened its economic woes

Foreign aid has started to reach Haiti days after a powerful earthquake killed nearly 2,200 people and flattened tens of thousands of buildings into rubble.

With almost 53,000 homes completely destroyed and more than 77,000 others damaged in Saturday's tremor, authorities have a massive group of people that will need extensive recovery help.

Yet, authorities intend to provide materials for locals to rebuild their collapsed houses, rather than set up the type of camps that popped up after the earthquake that killed over 200,000 in the capital Port-au-Prince.

The latest disaster struck just weeks after President Jovenel Moise was assassinated on July 7, plunging the nation of 11 million people deeper into a political crisis that has worsened its economic woes.

Hundreds of people lined up to receive provisions from the UN World Food Programme at a camp in the rural town of Camp-Perrin for people displaced by Saturday's 7.2 magnitude quake. The official death toll stood at 2,189 but was expected to rise.

A powerful earthquake in #Haiti has triggered large numbers of landslides. A break in the clouds offered Landsat 8 this view of hillslopes that gave way during the magnitude 7.2 temblor. https://t.co/aSIXKxuVOB pic.twitter.com/Fp0NycVvLG

A mudslide caused by two nights of heavy rain earlier this week had partly blocked the main road leading to the area. Any more rain could make it impassable, locals said. People were sleeping out in a field under trees.

Private relief supplies and shipments from the US government and others were arriving in the southwestern peninsula where the weekend quake struck, killing more than 2,100 people. But the need was extreme, made worse by the rain from Tropical Storm Grace, and people were growing frustrated with the slow pace.

Tension over the slow distribution of aid has become increasingly evident in the area hit hardest by Saturday’s quake. At the small airport in Les Cayes, people thronged a perimeter fence Wednesday as aid was loaded into trucks and police fired warning shots to disperse a crowd of young men.

International aid workers said hospitals in the worst-hit areas are mostly incapacitated, which is why many patients need to be moved to the capital for treatment. But reaching Port-au-Prince from the southwest is difficult under normal conditions because of poor roads and gangs along the route.

Even with a supposed gang truce following the earthquake, kidnapping remains a threat, underscored by the seizure of the two doctors working at the private Bernard Mevs Hospital in Port-au-Prince, where about 50 quake victims were being treated.

And another problem emerged in the quake-damaged southern provinces, where national police said villagers put up barricades on the roads to prevent aid from getting through, arguing that they need help too.

Haiti is the poorest country in the Americas, and is still recovering from a 2010 quake that killed over 200,000.