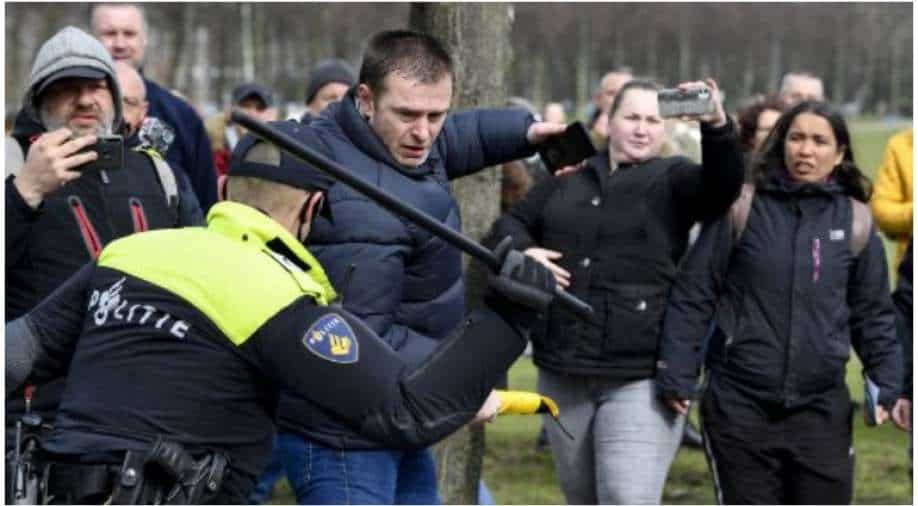 Hundreds gathered in a park to demonstrate against Prime Minister Mark Rutte. Some of the protesters also criticised the coronavirus restrictions his government put in place

Using water cannon and horses, Dutch police on Sunday cleared anti-government protes in The Hague. The protest took place on the day before voting starts in national elections. Hundreds gathered in a park to demonstrate against Prime Minister Mark Rutte. Some of the protesters also criticised the coronavirus restrictions his government put in place.

Police arrested several people, Dutch media reported. Riot officers with a dog pinned one man to the ground before detaining him, an AFP photographer saw.

"Today it's mainly because we have elections next week and we don't want the same government again," Elsvis Vanheenst, 32, who is unemployed, told AFP.

"Because they are lying about everything and they are only working for themselves, and not for the people. So that's mainly why I'm here today."

Riot police with shields, batons and dogs moved in after some of the protesters refused to leave at the scheduled end of the protest, detaining a number of them.

Police on horseback then charged at the demonstrators, few of whom wore masks.

Police finally fired water cannon but many of the demonstrators sheltered underneath yellow umbrellas from the spray. The yellow umbrellas have been a feature at several anti-lockdown protests.

The Hague police later also confirmed a "warning shot" was fired and said the cause was being investigated.