Dozens of people including Women, children evacuated from last IS holdout in Syria 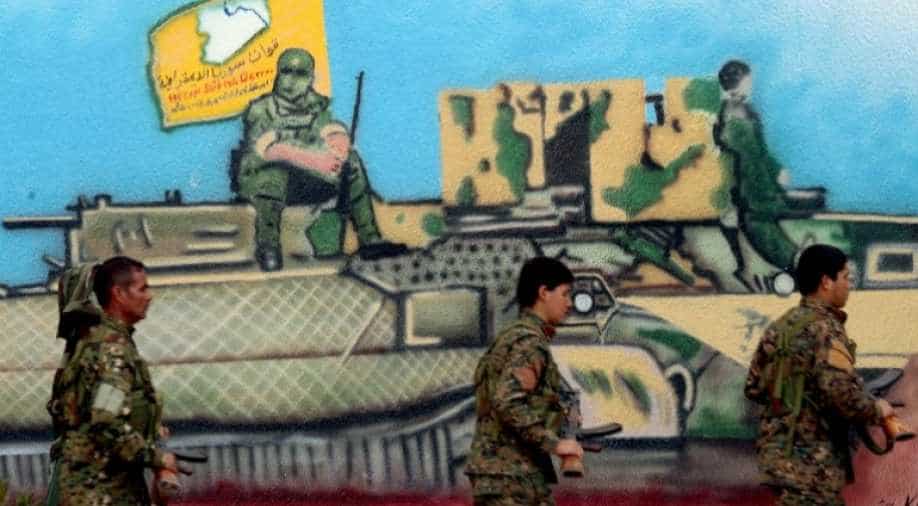 The implosion of the jihadist proto-state which once spanned swathes of Syria and neighbouring Iraq has left Western nations grappling with how to handle citizens who left to join IS.

A convoy of trucks evacuated dozens of people including women and children from the Islamic State group's last Syria redoubt Wednesday, bringing US-backed forces closer to retaking the last sliver of the "caliphate".

The implosion of the jihadist proto-state which once spanned swathes of Syria and neighbouring Iraq has left Western nations grappling with how to handle citizens who left to join IS.

Around 15 trucks carrying men, women and children exited the last patch of IS territory in eastern Syria, according to AFP correspondents.

Women wearing face veils, several children -- including young veiled girls -- as well as men were seen inside the vehicles.

Their exact number and nationalities were not immediately clear.

The convoy passed a position of the Kurdish-led SDF, which are spearheading the battle against the jihadists, after leaving the last IS holdout in the village of Baghouz, near the Iraqi border.

SDF fighters watched as double-trailer trucks made their way across the arid plain, dotted in places with grass and yellow flowers.

SDF spokesman Mustefa Bali said the trucks were evacuating a first batch of civilians, but some remained inside.

"After many days of trying, we were able to evacuate the first batch today," Bali told AFP.

The number of people who quit the holdout would become clear once the convoy arrived at a nearby SDF screening site, he said.

"We don't know if IS fighters are among them, we will know at the screening point," Bali said.

Backed by air strikes by a US-led coalition, the SDF have trapped IS fighters in less than half a square kilometre (0.2 square miles) of Baghouz.

The SDF have slowed their advance in recent days to protect civilians ahead of a final push to defeat the jihadists.

Thousands of people -- mostly women and children related to IS members -- have streamed out of Baghouz in the past weeks, but the flow had largely stopped in recent days.

The Syrian Observatory for Human Rights, a Britain-based war monitor, said a deal appeared to have been reached with the jihadists.

"There have been negotiations for the surrender of the last IS fighters," Observatory chief Rami Abdel Rahman said.

"There are reports of a deal, but we don't know the details yet," he said.

On Tuesday, the SDF said several IS fighters and dozens of civilians handed themselves over to the Kurdish-led force.

Spokesman Adnan Afrin said a convoy of trucks had entered Baghouz to transfer jihadists and their relatives out to SDF-held territory.

The spokesman said foreigners were among those who left the pocket, but did not say where they were from, or if they were civilians.

The Free Burma Rangers volunteer group said 40 people had exited the enclave on Tuesday, including a French woman with two infants.

The United Nations on Tuesday said around 200 families, including many women and children, were "reportedly trapped" in the last IS holdout.

Hundreds of alleged jihadists, including foreigners, have been detained after fleeing the pocket in recent weeks.

At its height, the IS "caliphate" spanned an area the size of the United Kingdom, with the jihadists implementing their brutal rule on millions.

After years of battling IS, the SDF hold hundreds of foreigners suspected of being IS fighters, as well as related women and children.

Syria's Kurds have long urged their home countries to take them back, but many European nations have been reluctant.

US President Donald Trump on Saturday urged European powers to take back hundreds of their citizens who fought for IS in Syria.

Britain, however, has rebuffed Trump's appeal and is expected to revoke the citizenship of a teenager who fled London to join the jihadists aged just 15, a lawyer for her family said Tuesday.

Shamima Begum, 19, is being held in a refugee camp in northeast Syria.

At the weekend, she gave birth to her third child, and appealed to British authorities to show "compassion" by allowing her and her baby to return.

The United States said Tuesday it was weighing options on an American woman detained in Syria who says she wants to return home.

Hoda Muthana, a 24-year-old from Alabama who became a prominent online agitator for the extremists, said in an interview published Sunday with British daily The Guardian that she had been brainwashed online and "deeply regrets" joining the movement.

While declining to discuss Muthana's case, US State Department deputy spokesman Robert Palladino said that the status of US citizens detained in Syria "is by definition extremely complicated".

Beyond Baghouz, IS retains a presence in the Badia desert and has claimed deadly attacks in SDF-held areas.