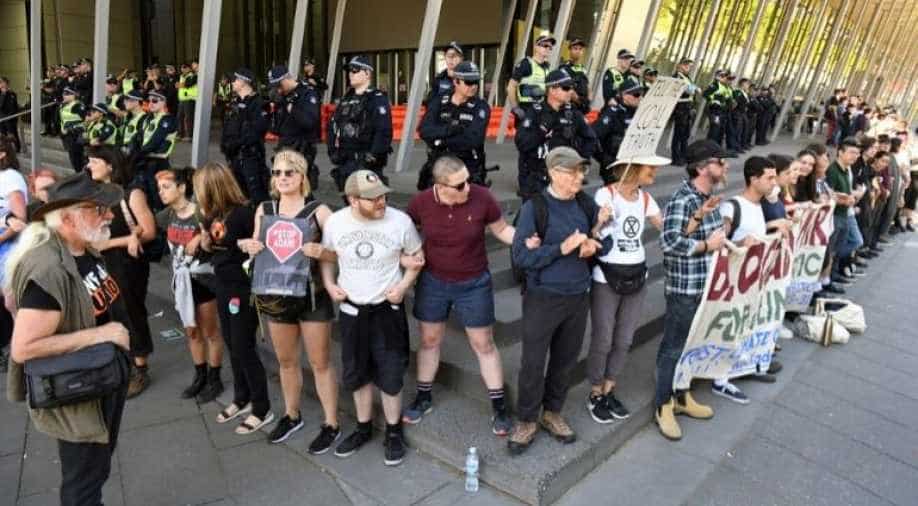 Dozens of protesters were arrested and several people injured Tuesday when police and demonstrators clashed outside an international mining conference in Melbourne.

Some 50 people were detained as mounted police forced back hundreds of protesters from the convention centre hosting the International Mining and Resources Conference.

Footage posted on social media showed police using pepper spray and batons to push back protesters, with one woman sent to hospital after allegedly being trampled or kicked by a horse.

Another protester was treated for head injuries at the scene while two police were also sent to the hospital for treatment, police said.

More than 300 police officers have been deployed.

"The actions (of police) have been more than justified," Victoria Police acting commander Tim Tully told reporters after the heated altercation.

Most of the arrests relate to obstruction, Tully said, but two people were detained for "slapping a police horse in the face".

The annual mining conference is promoted as Australia's largest industry event, with thousands of delegates from over 100 countries expected to attend.

Australia has been actively engaged in the recent wave of climate protests across the globe.

Hundreds of thousands of children, parents, and supporters rallied across the country in September for the global climate strike led by students.

The Extinction Rebellion protests also have drawn thousands into the streets this month, with regular smaller targeted demonstrations taking place over the last couple of weeks.

"There have been some incredibly aggressive and intimating tactics from the police," protest organiser Emma Black told Channel Nine TV.

"Some of my friends have been thrown to the ground, people that were just standing around doing nothing," she added.