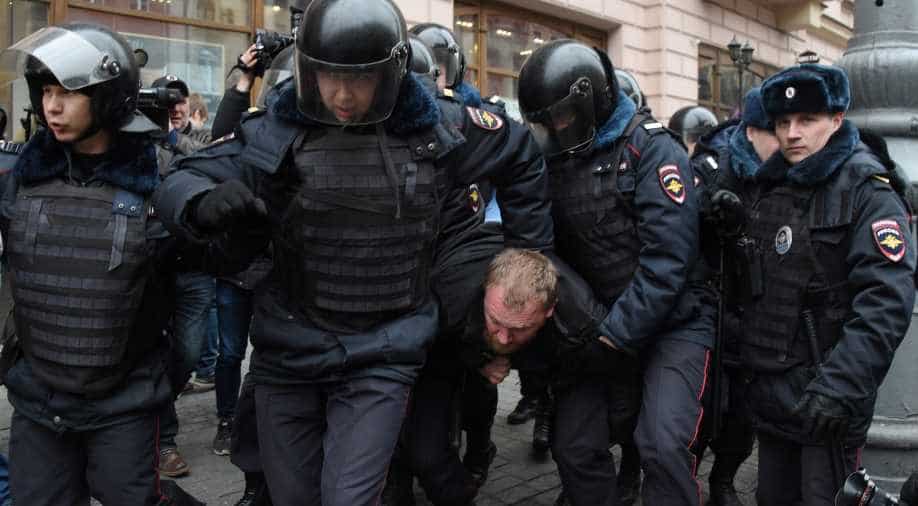 Russia's interior ministry said Sunday that 31 opposition protesters had been arrested in Moscow, a week after hundreds were arrested during a rally organised by leading Putin critic Alexei Navalny.

The ministry said the protesters were being held on charges of disrupting public order during a non-authorised demonstration, while OVD-Info, a website that monitors detentions of activists, said at 56 were detained, including four minors.

Opposition supporters had begun to walk peacefully along Moscow's main Tverskaya Street from a central metro station at around 1030 GMT in an event coordinated via social media.

Police in helmets and body armour swiftly moved to halt the protest which drew around 100 people.

An AFP photographer at the scene said people were detained as they simply walked along the street, without shouting slogans. A man holding a poster was detained first.

Similar rallies were held in other cities across the country, but with the approval of local authorities: About 400 people demonstrated in Novosibirsk, Russia's third-largest city, and 650 people in Samara.

But the interior ministry said one person was arrested at an unauthorised rally in Saint Petersburg.

Navalny 'knows nothing about this'

The latest detentions came after Navalny organised protests in cities across Russia on March 26, most of them unauthorised.

The largest rally in Moscow saw about 500 people detained according to police, while OVD-Info put the total at almost 1,000.

Navalny called the protest over his anti-corruption investigation into Prime Minister Dmitry Medvedev, linking him to huge mansions and vineyards in a video report garnering more than 16 million views on YouTube.

Among those protesting on Sunday was Pavel Dyatlov, a 16-year-old who became a symbol of youth protest in last week's rally after he was photographed climbing up a lamppost and being detained by police.

Dyatlov told AFP he had come back to protest on Sunday after reading about it on social media, saying the protest was "calling for the current government to stand down, or for early presidential elections."

"We were heading towards Red Square and the police started to push us back," he said before police detained him again.

"Right from the start I saw that they were detaining children and 'faces from the media' -- you could see they were acting in a targeted way," said 70-year-old Natalya Ponomarenko from the Moscow region, who also attended last week's rally.

"I came here a second time to see what the result of March 26 would be," she said, emphasising that the participants were peaceful and "the plan was to go for a walk."

It was unclear who was behind the rallies, in which no major opposition figures participated.

Posts on Facebook linked the protest to a little-known nationalist group called Novaya Oppozitsiya, or New Opposition, which called for people to turn out in support of those detained last week.

Navalny, who is currently serving a 15-day sentence behind bars for disobeying police at last Sunday's demonstration, distanced himself from Sunday's event.

"He knows absolutely nothing about this," his spokeswoman Kira Yarmysh wrote on Twitter.

The authorities earlier Sunday deployed a huge police presence in anticipation of an unauthorised protest on Red Square.

But journalists saw only a handful of activists there, some of whom voiced support for President Vladimir Putin.