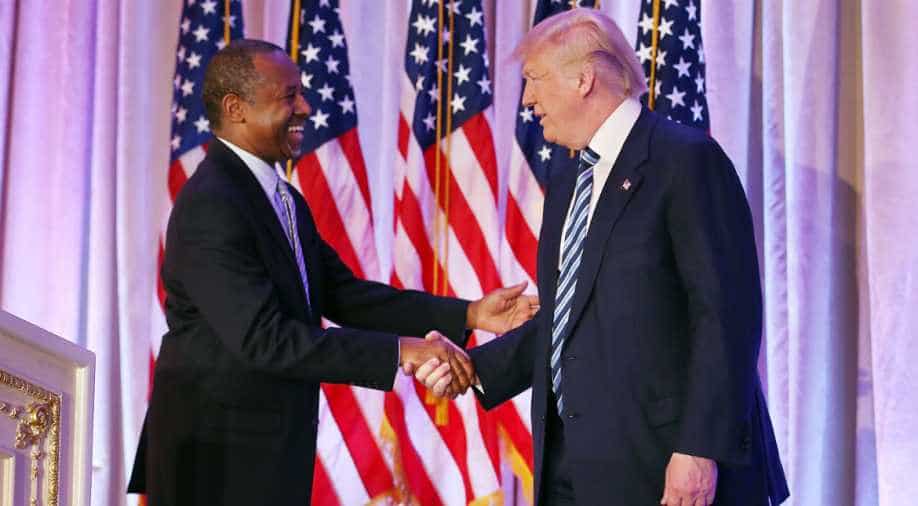 Carson's history is the epitome of the American dream. The 65-year-old grew up poor, raised by an illiterate mother who married at age 13 but left her bigamist husband. Photograph:( Getty )

US President-elect Donald Trump on Monday chose Ben Carson, the mild-mannered retired neurosurgeon who challenged him for the Republican nomination, to turn around troubled US inner cities as secretary of housing and urban development.

Carson, an African-American who is a religious conservative, has no background in housing policy but has cited his poor childhood in Detroit as a qualification for the job.

He is the first black selected by Trump for his team.

"Ben Carson has a brilliant mind and is passionate about strengthening communities and families within those communities," Trump said in a statement.

"We have talked at length about my urban renewal agenda and our message of economic revival, very much including our inner cities."

Carson said: "I feel that I can make a significant contribution particularly by strengthening communities that are most in need.

"We have much work to do in enhancing every aspect of our nation and ensuring that our nation’s housing needs are met."

"I grew up in the inner city," Carson told Fox News last month. "And have spent a lot of time there. And have dealt with a lot of patients from that area."

Carson briefly led the Republican presidential pack during the primaries, offering voters an unruffled, slow-talking persona that contrasted sharply with high-decibel slugfest around him.

His bid, which initially gained support among Christian conservatives, ultimately fizzled as he stumbled presenting concrete policies and answering questions about key issues.

The Seventh Day Adventist had presented himself as an alternative to the bombastic Trump, preaching tolerance and compromise but sometimes unleashing blunt rhetoric. These included many references to Nazi Germany, such as his suggestion that Jews would have fared better in the Holocaust had they been armed.

Trump mercilessly mocked him on the campaign trail, accusing Carson of having a "pathological" temper.

Carson nevertheless endorsed the real estate billionaire after withdrawing from the race in March, describing his former rival as "a very intelligent man who cares deeply about America."

He took Trump on a neighborhood tour of his Detroit hometown in September at a time when the nominee was looking to boost his image with African-American voters.

And he came to Trump's defence following the release of a 2005 audiotape in which he bragged about groping women.

Carson's history is the epitome of the American dream. The 65-year-old grew up poor, raised by an illiterate mother who married at age 13 but left her bigamist husband.

He developed into a model student, earning a scholarship to Yale University and attending the University of Michigan medical school.

At 33, he became the director of pediatric neurosurgery at Johns Hopkins University, earning global acclaim in 1987 by performing the first successful separation of twins conjoined at the head.

He retired in 2013 to hit the conservative talk circuit, describing how faith and family values had helped him as a drifting teenager to realize his dream.

He routinely promotes a return to individual responsibility -- a value that led him to denounce the welfare state, which he has warned only traps people in poverty.

"If we continually keep people in a dependent position," he told conservatives in 2013, "then they're soon going to lose the drive that is necessary to achieve in our society."