Donald Trump lashes out at Buzzfeed, CNN amid Russia allegations 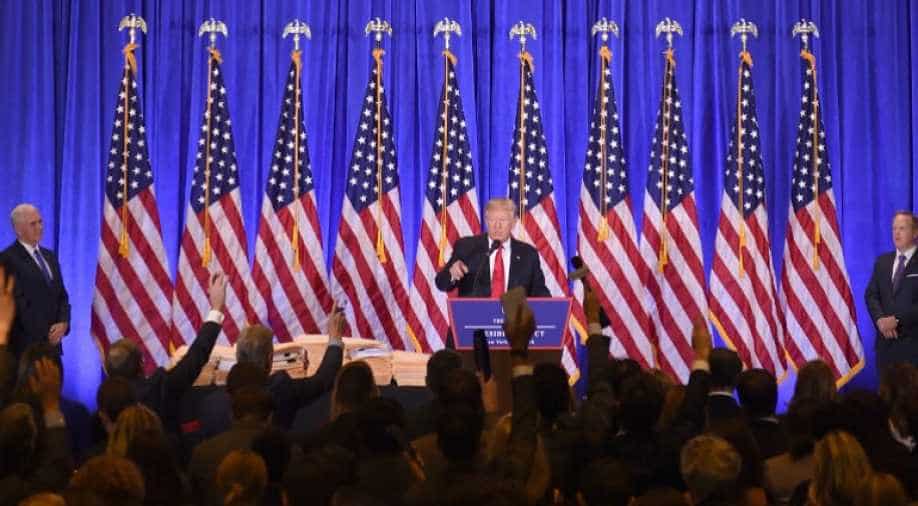 In fact, this will be his first media conference since July 2016.

Trump will be addressing the media at the lobby of Trump Tower in midtown Manhattan at 2130 Indian Standard Time (1400 hours GMT).

In the last 24 hours, Trump has faced a growing avalanche of questions about his alleged ties with the Kremlin -- allegations that have been vociferously denied by the president-elect.

On December 10, CNN reported that classified documents presented last week to president-elect Donald Trump included allegations that Russian operatives claim to have compromising information about him.

The allegations were in a two-page synopsis appended to a report presented by US intelligence officials to Trump and President Barack Obama on Russian interference in the 2016 election, citing multiple US officials with direct knowledge of the briefings.

To this, Trump tweeted:

Some of the tough questions he will have to face include Russia's role in Ukraine and Crimea, his ties with Moscow and the issue of barring Muslims from entering the country.

2241 IST: Now on to the intel agencies. "Intelligence agencies are vital. We are going to be putting in some outstanding people and they will come up with a major report on hacking. The United States is hacked by everybody. The Republicans didn't get hacked because we had a strong hacking defence. The Democrats failed and that's why they failed with the country," Trump said, adding that a hacking report will be submitted in the next 90 days.

He again condemns the intelligence units for outing classified reports. "That report should have never been written," Trump said, alluding to the BuzzFeed report.

2238 IST: Trump now moves to his pet peeve -- the media. He calls Buzzfeed a "failing pile of garbage" and also made a blistering attack on CNN. Things are getting quite tetchy now, with Trump now asking a reporter to quieten down and when the latter doesn't, he refuses to answer his question. He also sardonically calls the BBC a "thing of beauty".

2236 IST: On the Supreme Court, Trump said he had a list of 20 candidates. He will a decision in another two weeks.

2231 IST: He moves on to his next favourite project -- the Mexican border wall. There will be a major border tax on companies who are leaving and getting away with murder, the 70-year-old said. "If they hadn't, millions of people would have jobs in the country," Trump said, reiterating that "they are going to build a wall". He says they won't wait for a year to start building the wall and that the Mexicans will have to pay for the wall -- a theme that he has droned on about since his campaign trail.

He adds that he "respects" Mexico and the phenomenal "Mexican government". He doesn't blame the Mexican government but chastises the foolhardiness of the past US governments. "They (Mexico) just took advantage of the situation."

2227 IST: Finally on to ObamaCare, a topic that Trump wishes to talk about. He starts off by calling it a "total disaster" and that it was "imploding" in several states. "We don't want to own it, politically. We are going to be submitting a plan -- a plan to repeal and replace ObamaCare, almost simultaneously. We are going to get a health care in place, maybe within minutes after the ObamaCare is repealed. We are doing them (the Democrats) a great service by repealing the plan," Trump says, adding that they would put in place a cheaper health care plan.

2225 IST: Trump trains his guns on China again and the need to reverse the trade imbalance the US currently has with Beijing and Japan.

2223 IST: Dillon says Trump will donate all gifts received from leaders of other groups to the American treasury. She stresses that her client wants to make the country great again and bring success to all Americans.

2213 IST: "Trump has relinquished leadership of his company. His sons -- Don Junior and Eric -- will take over the company. The company will abide by the highest ethics standards. President Trump will resign from all positions he holds in the Trump entity. So will Ivanka relinquish all her roles in the company," says Dillon, the president-elect's lawyer.

2210 IST: When asked about his tax returns, Trump seems to parry the question, saying he wasn't releasing the figures as they were currently under audit. "The only people that care about my tax returns is the reporters,"Trump said as a handful of reporters whooped to back the president-elect. "I became president. I think you care. First of all you learn very little from tax returns.”

2207 IST: Trump says he could run the Trump organisation and the country at the same time but doesn't want to.

2205 IST: On his relationship with Vladimir Putin and him trying to help him win the election, Trump said: "If Putin likes Trump, I consider that as an asset, not a liability." He goes on to say "he has no deals with Russia, will not have deals with Russia and have no loans with Russia at all". He asserts he could make new deals in Russia but doesn't want to as it would be a conflict of interest.

2201 IST: "Putin said the fake news was indeed fake news. If something did happen, they (the Russians) would have released (information)," Trump said. Trump looks at the upside of the hack, saying it revealed important facts about Hillary Clinton. "It would have been big news if I had done that," says Trump

2200 IST: Responding to the hacking controversy that has dogged Trump ever since he won the election, he said he would build a more stringent anti-hacking devices.

2155 IST: He also talks about the F-35s and lamented about the much-delayed fighter jet project.

2153 IST: Trump hopes that the drug industry is revived in the country. Promises to streamline the bidding procedure of pharma companies. He also says that Chinese billionaire Jack Ma has promised to do "tremendous things" for the country.

2151 IST: Unexpectedly, Donald Trump starts off by chastising the intelligence agencies for leaking unverified news about his links to the Kremlin. However, he does say he has "great respect" for some of the media outlets and lauds their "professionalism"