Donald Trump is Time magazine's 'Person of the Year' 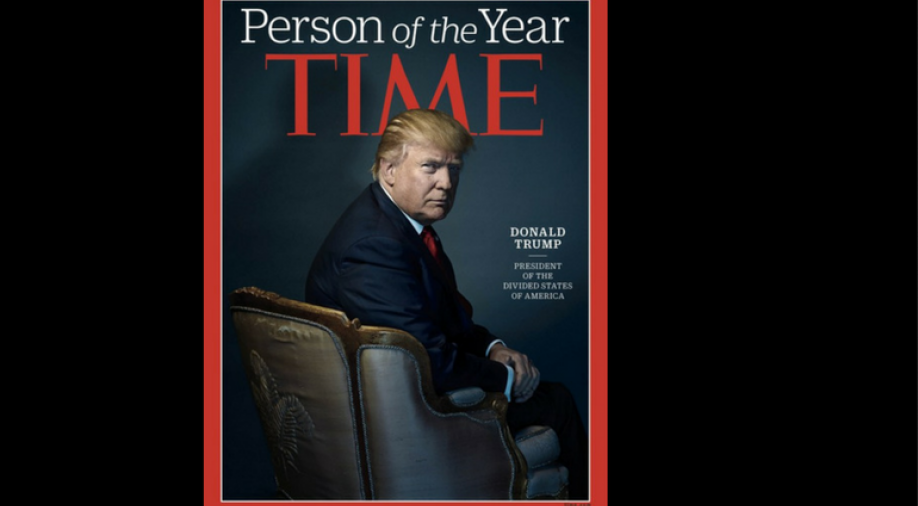 Donald Trump has been chosen as person of the year for his stunning victory in US elections. Photograph:( AFP )

Time magazine on Wednesday named Donald Trump its "Person of the Year" for 2016 for his stunning upset election victory that rewrote the rules of politics, delivering him to the helm of a divided America.

The president-elect dialed into NBC television's Today show, welcoming the accolade as a "very, very great honor," denying he was responsible for divisions and praising outgoing Democratic President Barack Obama.

The real estate tycoon, who has never previously held elected office and shocked the political establishment by defeating his Democratic rival Hillary Clinton, is featured on Time's cover described as "Donald Trump: President of the Divided States of America."

The magazine said its person of the year, a tradition that began in 1927, "had the greatest influence, for better or worse, on the events of the year."

"So which is it this year: better or worse?" editor-in-chief Nancy Gibbs wrote. "The challenge for Donald Trump is how profoundly the country disagrees about the answer."

"Like all newly elected leaders, he has a chance to fulfill promises and defy expectations," said Gibbs.

Trump won the title, she added, for "reminding America that demagoguery feeds on despair and that truth is only as powerful as the trust in those who speak it, for empowering a hidden electorate by mainstreaming its furies and live-streaming its fears, and for framing tomorrow's political culture by demolishing yesterday's."

In the past Time has showed its editorial teeth by naming sinister figures -- Adolf Hitler in 1938 and Joseph Stalin both in 1939 and 1942.

The president-elect told NBC's Today show that he thought the sub-heading on the front cover about a divided America was "snarky" and denied that it was his fault.

"I'm not president yet so I didn't do anything to divide," he said, despite having inflamed the country by campaign rhetoric disparaging women, illegal immigrants and Muslims among others.

For years he criticized Obama and was instrumental in the so-called "birther" movement that questioned whether the first black president was born in the United States.

"I will say this: I've now gotten to know President Obama, I really like him," Trump told NBC on Wednesday. "I can't speak for him, but we have a really good chemistry together. We talked," he said.

"He loves the country, he wants to do right by the country and for the country and I will tell you, we obviously very much disagree on certain policies and certain things, but I really like him," he added.

The billionaire even said that he discussed some of his possible appointments with the outgoing Democratic president.

"I take his recommendations very seriously and there are some people that I will be appointing and in one case have appointed where he thought very highly of that person," Trump said.

Clinton, the former secretary of state who became the closest in history to becoming America's first female commander in chief, was named the runner-up, with computer hackers in third place.

The former first lady won the popular vote with around 2.7 million more votes than Trump, but the Republican won the crucial Electoral College by 306 to 232.

Trump campaigned hard on a promise of bringing back jobs with the old manufacturing heartland hard hit by companies fleeing overseas and taking jobs to cheaper labor markets in China or Mexico.

Trump told Time in an interview that he asked Apple CEO Tim Cook to build in the United States "a great plant, your biggest and your best, even if it's only a foot by a foot bigger than some place in China."

"I'm sitting in an apartment the likes of which nobody's ever seen. And yet I represent the workers of the world. And they love me and I love them," he told the magazine.

"I think people aspire to do things. And they aspire to watch people. I don't think they want to see the president carrying his luggage out of Air Force One. And that's pretty much the way it is," he said.