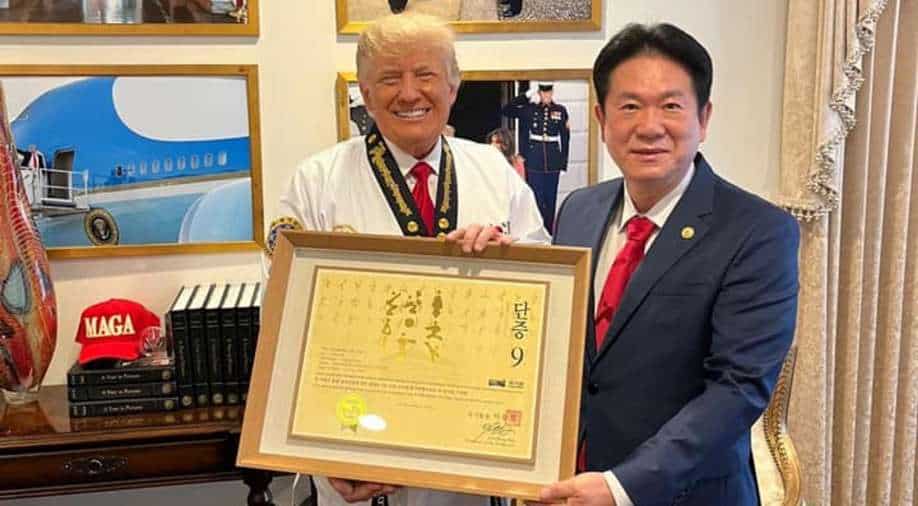 Donald Trump was given the honourary title on November 19 Photograph:( Facebook )

He was given the honourary ninth dan certificate, the highest level in the martial arts by Kukkiwon, the headquarters of the World Taekwondo Academy, at Trump’s home in Florida

Former US president Donald Trump was given the ‘black belt’ title in taekwondo even though he has never practised the sport.

He was given the honourary ninth dan certificate, the highest level in martial arts by Kukkiwon, the headquarters of the World Taekwondo Academy.

The organisation's president, Lee Dong-seop, visited Trump's residence in Florida on November 19 to present him the black belt.

Responding to the gesture, Trump said he was honoured to receive the award.

“It is my honor to receive Honorary Dan Certificate and I think Taekwondo is magnificent martial art for self-defense. I wish to see Kukkiwon Taekwondo Team’s demonstration,” Kukkiwon quoted Trump as saying in its Facebook post.

The organisation said that the ceremony was “not related to any other political issues”.

A South Korean resident in the United States reportedly organised the meeting.

“I came to know that Donald Trump is quite interested in Taekwondo,” Daily Mail quoted Lee as saying.

The former president vowed that he would look to wear the taekwondo clothing in Congress should he make a return to the White House in the future.

Notably, Trump isn’t the only world leader to receive the honours. Before him, Russian President Vladimir Putin was facilitated with the coveted rank. Putin had also not practised taekwondo when he was awarded in 2013.