Despite warmth, Merkel and Trump still differ on trade and NATO 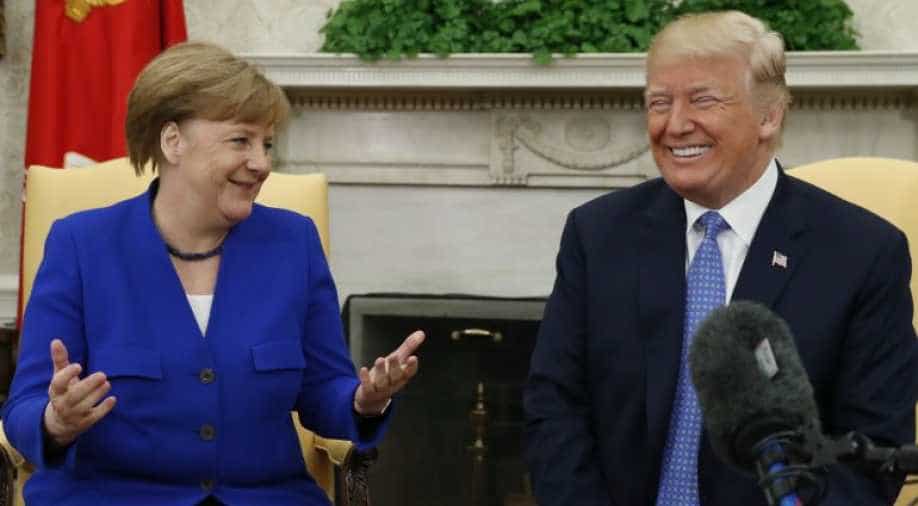 With Trump poised to impose tariffs on steel and aluminium soon that will impact European exports, Merkel said the decision is now in Trump`s hands on whether to grant exemptions to European Union nations

German Chancellor Angela Merkel and US President Donald Trump aired differences over trade and NATO on Friday at a White House meeting where they tried to put on a show of warmth and friendship despite tensions between the two allies.

With Trump poised to impose tariffs on steel and aluminium soon that will impact European exports, Merkel said the decision is now in Trump's hands on whether to grant exemptions to European Union nations.

"We had an exchange of views. The decision lies with the president," Merkel told a joint press conference after Trump complained about the US-European trade imbalance, particularly in regards to automobiles.

Merkel's quick trip came the same week as a three-day state visit by French President Emmanuel Macron, who, like Merkel, pressed Trump on trade and urged him to keep the United States in a multi-national nuclear deal with Iran. Neither leader appeared to make significant progress convincing Trump on either issue.

Merkel said she could see negotiating a bilateral trade deal between the EU and the United States, saying the World Trade Organization has been unable to deliver multilateral agreements.

After their last White House meeting drew attention when the two leaders did not shake hands in the Oval Office, Trump made a point of doing just that, twice, while congratulating the German chancellor on her recent election win. They exchanged kisses on the cheek when she first arrived at the White House.

"We have a really great relationship, and we actually have had a great relationship right from the beginning, but some people didn't understand that," Trump said in the Oval Office, calling Merkel a "very extraordinary woman."

Merkel acknowledged that it took a while to form a government after heavy election losses to the far-right, but she said it was important to her to make her first trip out of Europe since establishing her administration to Washington.

The cautious Merkel has not established a particularly strong personal rapport with the brash Trump, and the mood of her one-day working visit contrasted sharply with the tactile "bromance" between Trump and Macron.

Chemistry aside, Merkel was careful to praise Trump`s progress on North Korea while addressing some of his concerns point by point on defence spending, which she said Berlin was increasing, and German cars, many of which she noted were produced in the United States.

On the Iran nuclear deal, Merkel said it was a first step that had helped reduce nuclear activities and better monitor them but added: "We Germans think it’s not enough to really ensure Iran takes on a role founded in reliability so more is necessary."

Macron made the European position on the Iran nuclear deal clear ahead of Merkel's visit.

On Wednesday, he called on the United States not to abandon the Iran deal as Western envoys said Britain, France and Germany were nearing agreeing a package they hope could persuade Trump to save the pact.

Trump will decide by May 12 whether to revive US sanctions on Iran. Doing so would be a serious blow to the nuclear deal, which many Western countries sees as essential for stopping Tehran developing a nuclear bomb.