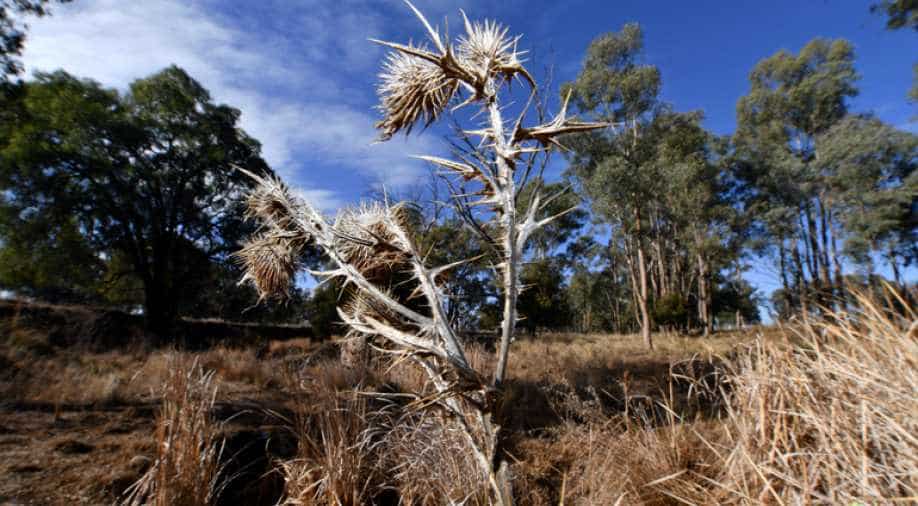 This photo taken on August 7, 2018 shows a dried stream in the drought-hit area of Duri in New South Wales. Photograph:( AFP )

While the country is no stranger to "big drys" and its people have long had a reputation as resilient, the extreme conditions across swathes of Australia's east are the worst in more than 50 years.

A smattering of rain earlier this week did little to ease one of the driest starts to the year on record, turning pastures to dust and destroying huge areas of grazing and crop lands.

With no feed, farmers have been forced to ship in grain or hay from other parts of the country to keep sheep and cattle alive, spending thousands of extra dollars a week just to stay afloat.

Some exhausted graziers spend hours each day hand-feeding their stock because the ground is too dry for grass to grow. Others have been forced to shoot starving cattle.

Farmers have also had to ration water for their families and their herds because the dams on their properties are dry or nearly empty.

Many face the prospect of abandoning their homes altogether -- some after being on the land for generations.

It is a scenario repeated across New South Wales state, where agriculture contributes more than Aus$15 billion (US$11 billion) to the state's economy annually, employing more than 77,000 people.

Authorities on Wednesday officially declared the entire state in drought.

Conditions are similarly dire in Queensland to the north, where the state government says nearly 60 per cent of land is suffering drought conditions.

"This would be the first time in two generations, back to the 1930s, that we haven't got a crop up in the autumn or winter time," Greg Stones, who runs a small farm of cattle, sheep, grain and crops near drought-hit Gunnedah, a five-hour drive north of Sydney, told AFP.

"The land is too dry... We've put cattle on the highway (near the farm) for the first time in my life (so) they get a bit of rough grass."

It includes two lump sum payments worth up to Aus$12,000 per household and changes to an assets test to grant support to thousands of more farmers.

There was also cash for counselling and mental health services, with drought-related stress and even suicide a mounting concern, compounded by the isolation many feel on their remote properties.

"We are the land of droughts and flooding rains. We recognise that. It’s a very volatile and often capricious climate and Australian farmers are resilient, they plan for drought, they are good managers but it can become really overwhelming," said Prime Minister Malcolm Turnbull.

"They understand drought is part of the Australian climate and they manage for it, but this drought is longer and more widespread than any drought we've seen in over 50 years so that's why we've got to provide additional support."

Others said it was too little, too late.

"I think the only problem is it was probably a little bit late coming for some people. They didn't act fast enough," Col Barton, whose family has been on their farm east of Gunnedah since 1938, told AFP.

"All the climate gurus that know all about the weather still can't tell us when (the drought is) going to break. We've got no idea so we run blind. We've just got to plan and hope and pray that it rains."

Australia's weather bureau has warned there is no end in sight and the Red Cross has set up a relief appeal, while the Salvation Army is distributing food hampers.

It is not just farmers doing it tough, but also the towns that service them.

Murrurundi, some 300 kilometres (186 miles) north of Sydney, has received less than 170 millimetres of rain this year and could run out of drinking water within months.

Severe restrictions are in place, including three-minute showers and only two washing loads of clothes a week, with fears the town may need to truck in supplies.

Grazier Mark Wylie has spent Aus$30,000 in the past six weeks boring for groundwater, to no avail.

Even if he or Murrurundi authorities find a water source, he told local media: "It's a finite resource, it won't go on forever."

Water diviner Glen Shepherd, who has lived in the town for more than three decades, said these were the driest conditions he had ever seen.

"It's shocking to see," he told AFP. "And the people in the city don't realise, or they are starting to realise now, everything does come off the land -- the bread, the cereal, the milk.

"If the drought doesn't break, it's going to happen," he added, referring to farms going out of business.