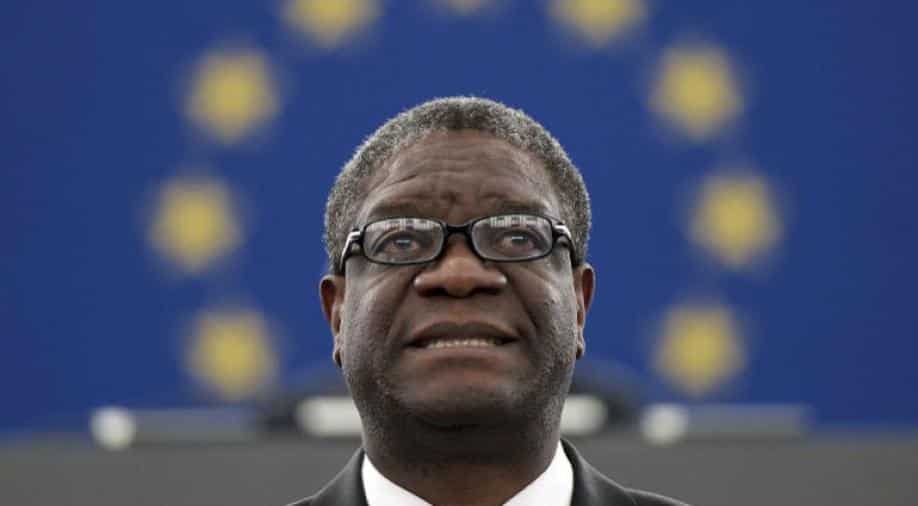 A father to five children, the tireless 63-year-old is an outspoken critic of the abuse of women in war.

In Democratic Republic of Congo, they call him "Doctor Miracle" for his surgical skill and dedication in helping women overcome the injuries and trauma of sexual abuse and rape.

Denis Mukwege is a crusading gynaecologist who has spent more than two decades treating appalling injuries inflicted on women in DRC, whose work was the subject of an acclaimed 2015 film titled: "The Man Who Mends Women."

A father to five children, the tireless 63-year-old is an outspoken critic of the abuse of women in war who has repeatedly accused the world of failing to act.

The 2018 Nobel Peace Prize co-winner had been repeatedly nominated for his work with gang rape victims from the conflicts that have ravaged his homeland.

Mukwege has called on the world to take a tougher line on rape as a weapon of war.

"We have been able to draw a red line against chemical weapons, biological weapons and nuclear arms," he told AFP in 2016.

"Today we must also draw a red line against rape as a weapon of war," he said, describing it as a "cheap and efficient" form of terror which condemns its victims to "a life sentence".

In his French autobiography, "Plaidoyer pour la vie" ("Plea for Life"), Mukwege recounts the "depths of horror" he encountered in his native South Kivu province that led him to set up the Panzi hospital in Bukavu.

He began working at Lemera hospital, south of Bukavu, which was where he first learnt to deal with severe post-natal lesions that left women incontinent for life.

Later he encountered victims of horrific rapes for the first time.

Recalling the moment he saw such a patient for the first time in 1999 -- the year he set up Panzi hospital -- Mukwege recounted how the rapists had inserted a gun into a woman's genitals and fired.

"Her whole pelvis was destroyed. I thought it was the work of a madman, but the same year I treated 45 similar cases," he said.

"For 15 years I have witnessed mass atrocities committed against women's bodies and I cannot remain with my arms folded because our common humanity calls on us to care for each other."

His work has also put his own life on the line, with Mukwege narrowly escaping an attack on his life in October 2012, in which his guard was killed.

At the Bukavu hospital, which serves as a clinic for gynaecological and obstetric care, he lives under the permanent protection of UN peacekeepers.

Aid agencies have accused all sides in the conflicts that have ravaged the eastern regions of North Kivu and South Kivu of using "systematic rape" against women as a weapon of war.

In 2016, Mukwege said there were "unbearable atrocities" being committed in the country's east, including the mutilation of babies and the disembowelling of pregnant women.

He said the "crimes and cruelties that have plagued eastern DRC for 20 years had been reborn with a new intensity", as he criticised growing authoritarianism in the country.

Earlier this year, he said there had been a rise in such attacks since 2016, with the majority of sexual violence in South Kivu now committed by civilians and not by armed groups or the security forces.

Many civilians are former rebels.

The 450-bed Panzi hospital that Mukwege founded treats more than 3,500 women a year, though not all for sexual abuse, providing free consultations and performing reconstructive surgery on women who have suffered serious internal injuries.

Levi Luhiriri, who works as a doctor at the hospital, said Mukwege was fair but tough and strived for internationally-recognised standards at Panzi.

"He is straight and just but doesn't tolerate mediocrity," he told AFP.

As well as his tireless medical work, Mukwege has fronted a worldwide campaign against the purchase of conflict diamonds.

Born on March 1, 1955, in Bukavu, the third of nine children, Mukwege was inspired to become a doctor by his father, a pastor who used to visit the sick.

After studying medicine in neighbouring Burundi, he returned to work in Lemera hospital before pursuing specialist training in gynaecology in Angers, France.

He has been honoured previously by the United Nations and has received many other international awards, including the Olof Palme Prize in January 2009 and the Sakharov Prize in 2014. In September 2016, he also won the Seoul Peace Prize.

He was appointed a professor at the Universite libre de Bruxelles in Belgium in 2015.