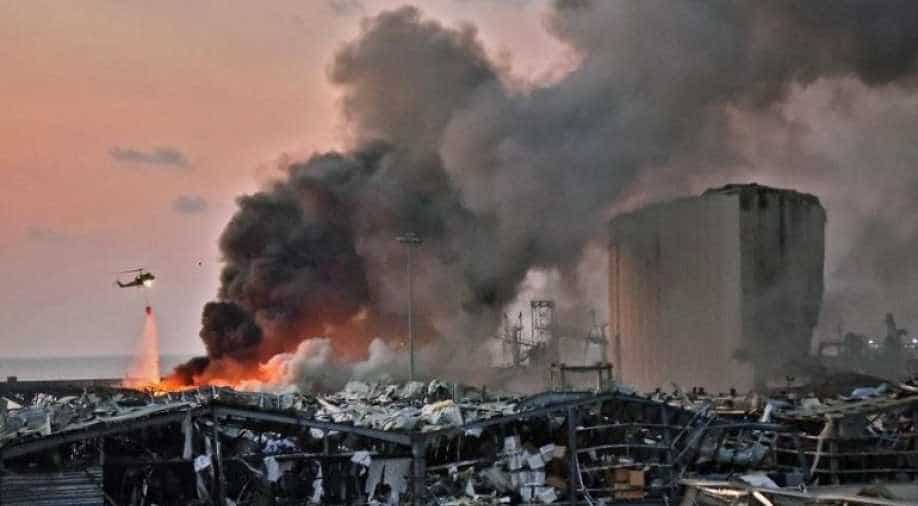 A helicopter puts out a fire at the scene of an explosion at the port of Lebanon's capital Beirut on August 4, 2020. Photograph:( AFP )

In the fallout of the explosion, windows were smashed, and the ground shook in the capital city

Death toll from a huge blast in port warehouses near central Beirut has gone up to 78. An additional 4,000 people have been injured in the attack.

In the fallout of the explosion, windows were smashed, and the ground shook in the capital city.

According to officials, the death toll is expected to increase, with authorities digging through rubble to find more corpses. Been seen as the most powerful explosion to hit Beirut in years, it is a major blow the country already suffering because of coronavirus and an economic crisis.

The buzzing of helicopters, and ambulance sirens could be heard all over the city.

Hospitals in the city became quickly occupied, given the ongoing coronavirus pandemic. Due to this, many were taken outside the city. Additional ambulances were called in from northern and southern parts of the country. Ambulances also came in from the Bekaa valley in the east.

Locals first mistook it for an earthquake, owing to how big it was. In the aftermath of the blast, people could be seen lying on the streets, wounded, some dead.

Hospitals are facing the brunt of the tragedy. A medic told Reuters that over 200 to 300 people were admitted into one emergency department. “I’ve never seen this. It was horrible”, the medic Rouba said.

Hassan Diab, the PM of the country said that there would be accountability for the deadly blast at the “dangerous warehouse”.

“Those responsible will pay the price”, he announced in an address. The US embassy has released a warning in the city asking people to stay indoors and wear masks as toxic gases from the blast may be lurking in the city.