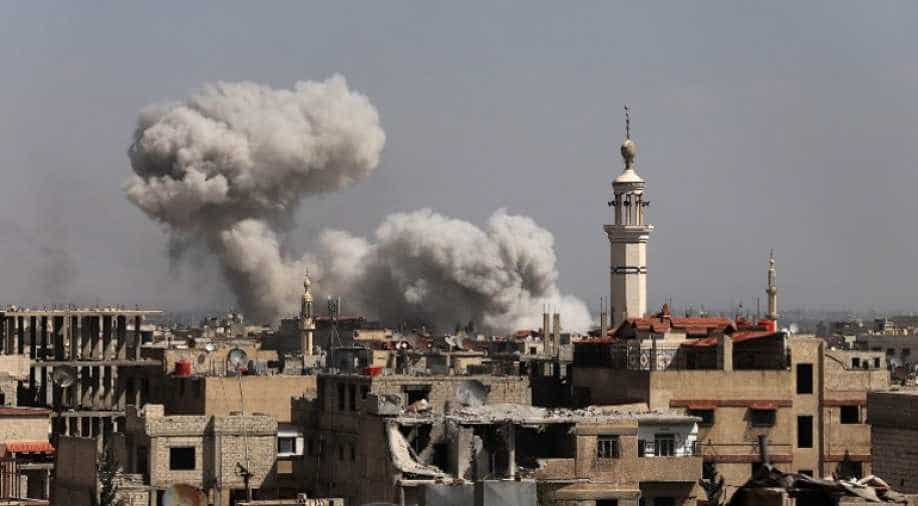 Smoke billows following Syrian government bombardment on the rebel-controlled town of Kafr Batna, in the besieged Eastern Ghouta region on the outskirts of the capital Damascus on March 11. Photograph:( AFP )

The Syrian regime on Sunday drew closer to taking full control of rebel bastion Eastern Ghouta after a deal appeared to be reached for fighters and civilians to leave the enclave's last opposition pocket.

There was no immediate confirmation from the rebels, but Russia's military said it had "reached a preliminary agreement for the withdrawal" of the group from Eastern Ghouta near Damascus.

No date was given for the pullout and Moscow said rebels were expected to demine buildings and clear roadblocks before leaving.

The retaking of Eastern Ghouta would mark a major milestone in President Bashar al-Assad's efforts to regain control of territory seized by rebel factions during Syria's seven-year civil war.

Backed by Russia, Assad's forces have scored a series of victories over rebel forces in recent years, often through campaigns of siege, aerial bombardment and ground offensives that have drawn widespread international condemnation.

State agency SANA reported that Jaish al-Islam will head to Jarabulus in the northern province of Aleppo, while the Syrian Observatory for Human Rights said they would also go to Al-Bab, both towns held by pro-Turkey rebels.

The deal will see Russian military police enter Douma and government institutions return to the town, the monitor said.Regime forces have already retaken more than 95 percent of Eastern Ghouta in a six-week air and ground blitz that has killed hundreds of civilians and forced tens of thousands from their homes.

The assault since February 18 has killed more than 1,600 civilians, the Observatory says, and devastated entire neighbourhoods.

Successive evacuation deals for other parts of Ghouta have seen more than 46,000 fighters and civilians bussed out in recent weeks, according to an AFP tally of figures provided by SANA.

In the latest agreed departures some 24 buses carrying 1,146 fighters from the Faylaq al-Rahman rebel faction and their families left Douma in the direction of Idlib on Sunday, Syrian state television reported.

That added to the 41,000 already evacuated from a southern pocket including the town of Arbin this week under an earlier deal with Faylaq al-Rahman.

More than 4,000 people also left the devastated town of Harasta last week under a deal with the Ahrar al-Sham rebel group.

Tens of thousands of other civilians have fled to regime-held territory.Talks with Jaish al-Islam for the evacuation of Douma have dragged on for several days, with residents growing nervous.

"Of course I would rather leave. There are no more homes here, not a single place to settle," said Abu Rateb, 30.

"But I won't go to regime-held areas to join ranks with the Syrian army," he said, adding he would prefer to go to Idlib.

Haitham, 38, a media activist who did not give his surname, said he would rather stay in his hometown.

"To abandon your home is to abandon your soul," he said. "But if they give us the choice of dying or leaving, it will be another matter."

Syria's conflict has killed more than 350,000 people since 2011, and spiralled into a complex war involving world powers.

On Sunday, Pope Francis called for an end to the "carnage" in Syria in his Easter message.

"Today we implore fruits of peace upon the entire world, beginning with the beloved and long-suffering land of Syria," the pontiff said.

To mark Easter Day, Syria's presidency said that Assad and his wife Asma visited the home of a Christian girl injured in rebel shelling of her neighbourhood in Damascus.