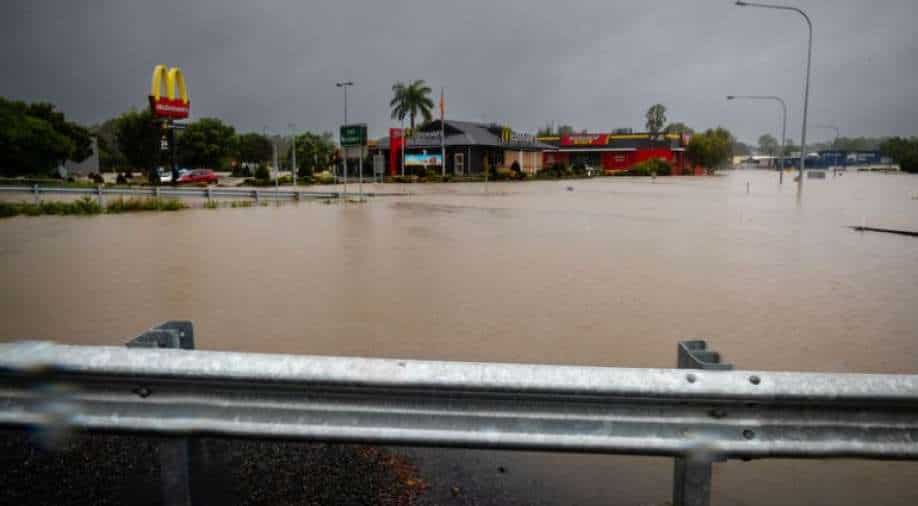 Images of southeast Queensland broadcast on Australian media showed homes and roads flooded, areas of land transformed into lakes and a large chunk of a concrete pier floating down the fast-running Brisbane River

Police in the eastern state of Queensland said they had found the body of a 37-year-old man, raising the flooding death toll to five people since early this week. At least one person is still missing.

Images of southeast Queensland broadcast on Australian media showed homes and roads flooded, areas of land transformed into lakes and a large chunk of a concrete pier floating down the fast-running Brisbane River.

The water snatched the car of a team of four emergency services workers who were heading to rescue a family from their flooded home overnight, said state police disaster coordinator Steve Gollschewski.

"The vehicle in which they were travelling was swept off the road into floodwaters. Three of our members were rescued. One of those members is deceased," Gollschewski told a news conference.

"In some parts of southeast Queensland, this is the biggest event that they will see in a number of decades," said state police and emergency services minister Mark Ryan.

"And the rain has not stopped -- in fact, there are some parts where it is intensifying."

The Queensland town of Gympie was facing a "hell of a lot of water" as the Mary River rose, Gympie Mayor Glen Hartwig was quoted as saying by national broadcaster ABC.

In the town's Royal Hotel, "without a submarine or a snorkel, you will not be having a beer," Hartwig said.

"It's floor-to-ceiling and over the roof in some areas."

Queensland Premier Annastacia Palaszczuk said the Mary River could rise above 21 metres (69 feet) at Gympie. It may exceed levels last seen there in February 1999, the bureau of meteorology said.

As a precaution, Queensland would be issuing evacuation alerts, notably targeting about 700 residents in the Gympie area, the premier said.

"If we don't do this now people will become isolated and trapped," she warned.

The premier said her "heart goes out" to the volunteer emergency services worker, 62-year-old Merryl Dray, who died "trying to save her community".

Emergency services had responded to more than 1,800 calls for help in 24 hours in southeast Queensland, officials said.

Rainfall in some areas of the state had exceeded records going back decades, said senior Queensland meteorologist David Grant.

He predicted further rain on Sunday as the weather system moved away more slowly than had been anticipated.

"There is now going to be an increased risk of dangerous and life-threatening flash flooding, and even the potential for localised landslides," he told a news conference.

"Essentially we've seen a month's worth of rainfall fall in one day for just Brisbane alone," Grant said.

"Our catchments are completely saturated. Our rivers are rising. We have flash flooding. Now is not the time to be out in southeast Queensland if you don't have to be," Leach said.