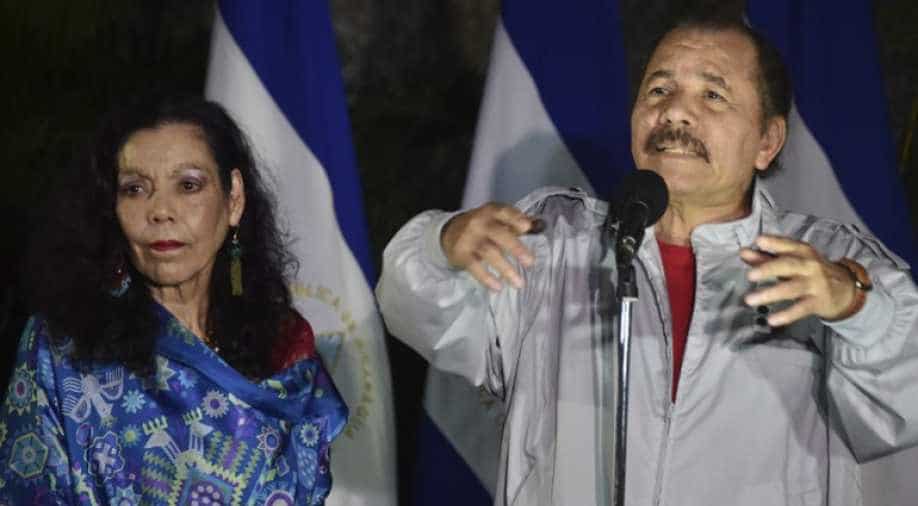 Ortega, who has ruled Nicaragua for 20 of the past 37 years, has been accused of using the courts to limit the power of the opposition. Photograph:( AFP )

Nicaragua's leftist President Daniel Ortega has won a third straight term, with his colorful wife Rosario Murillo as vice president, results showed on Monday, but the opposition and the United States condemned the election.

With 99.8 per cent of ballots counted, the 70-year-old former Marxist rebel had 72.5 per cent of the vote, the country's Supreme Electoral Council said.

His nearest competitor, Maximino Rodriguez of the right-leaning Liberal Constitutionalist Party, had just 15 per cent.

Ortega, who has ruled Nicaragua for 20 of the past 37 years, has been accused of using the courts to limit the power of the opposition.

His opponents branded the election a "farce", a criticism echoed by the United States, which said the "flawed" process had made free and fair polls impossible.

"The decision by the Nicaraguan government not to invite independent international electoral observers further degraded the legitimacy of the election."

There was mixed reaction in Latin America.

Ortega received congratulations from several countries, including not only leftist allies in Cuba, Venezuela and El Salvador but also the government of Mexico.

As Ortega's opponents had urged Nicaraguans to boycott Sunday's vote, all eyes were on turnout.

Electoral officials said 68.2 per cent of voters cast ballots. The opposition gave a wildly different estimate: under 30 per cent.

"We don't recognise the results of this farce," Violeta Granera, head of one of the opposition parties, the Broad Front of Democracy, told reporters before the tally.

Government and electoral officials described the vote as a great exercise in democracy, conducted in "calm" -- despite the torching of one rural polling station.

"It's a vote for peace, for the security of the Nicaraguan people," Ortega said after casting his ballot.

By his side, Murillo, a poet and longtime government spokeswoman, said the polling was "exemplary."

They account for more than a third of the population and have benefited from his social programs.

Ortega's supporters poured into the streets to celebrate, honking their car horns and waving white and blue Nicaraguan flags.

"We expect him to keep fulfilling his promises, to keep giving us food and housing," one supporter, Maria Auxiliadora Monte, told AFP.

"He is the best president we have had."

Nicaragua's powerful business interests have also been well-served by economic stability and security under Ortega and his party, the Sandinista National Liberation Front (FSLN).

But with billions of dollars in credit from troubled ally Venezuela drying up, and massive infrastructure projects, such as a proposed transoceanic canal to rival Panama's, failing to materialise, Nicaragua's prospects are clouding over.

It will be Ortega's fourth term. He has served two consecutive terms since 2007, and previously ruled between 1979 and 1990, when his Sandinista rebels emerged victorious from a revolution that toppled the dictatorial Somoza dynasty.

The opposition now accuses Ortega and Murillo of launching a dynasty of their own.

The eccentric first lady already plays a prominent role as the government's spokeswoman and is seen as possibly taking over as president in the future.

With Ortega increasingly reluctant to make public appearances, his 65-year-old wife known as "Comrade Rosario"  has stepped up -- in her trademark colorful dresses and hippy-chic jewelry, as the administration's daily face.

"The practice of 'couples in power' is not exclusive to Nicaragua," Veronica Rueda Estrada, a Nicaragua expert and professor at Mexico's Quintana Roo University, told AFP.

She cited Cristina Kirchner, who succeeded her husband Nestor Kirchner as president of Argentina, and Hillary Clinton in the United States.