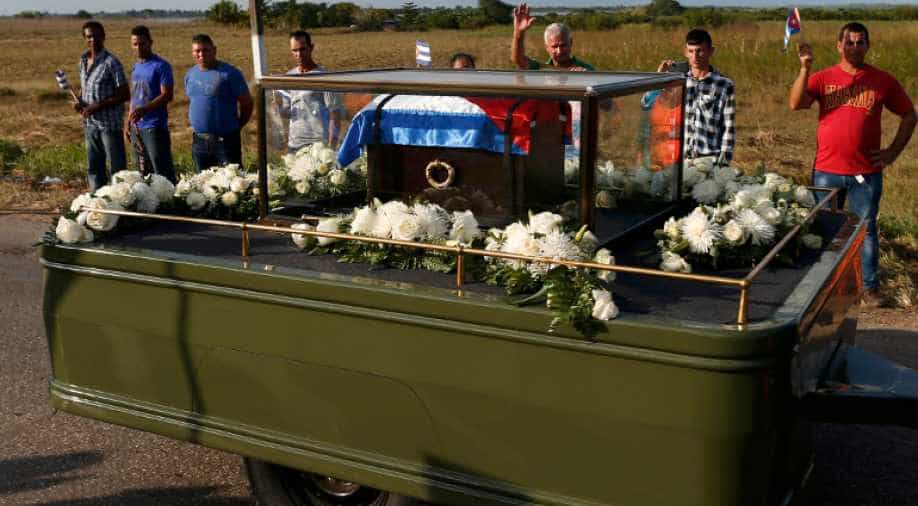 "Fidel is everything to Cuba, and we are going to miss him," said Guillermo Cadiz, 83, who said he fought with Fidel and his rebel army in the Sierra Maestra mountains. Photograph:( Reuters )

Feted by cheering Cubans, a funeral cortege carried the ashes of Fidel Castro out of Havana on Wednesday on a three-day journey to his final resting place in the east of the island where he launched the Cuban Revolution six decades ago.

Cubans on the roadside chanted "Fidel!" and waved small Cuban flags, displaying revolutionary zeal or nationalist pride for a man who ruled Cuba for 49 years with a mix of charisma and iron will, creating a Communist state at the US doorstep and becoming a central figure in the Cold War.

Castro died on Friday at age 90, a decade after stepping down due to poor health and ceding power to his brother, current Cuban President Raul Castro, 85.

"Fidel is everything to Cuba, and we are going to miss him," said Guillermo Cadiz, 83, who said he fought with Fidel and his rebel army in the Sierra Maestra mountains.

"There will never be another like him," he said from the town of Jovellanos around 100 miles (160 km) east of Havana, wearing a straw hat and a clutch of medals.

"Who doesn't feel the death of our Commander in Chief? He's dead but lives in the heart of all those who feel it," she said.

A green military jeep towed a flatbed trailer displaying a flag-draped box that contained Castro's cremated remains. The box was encased in glass and surrounded by white flowers.

The remains were to rest overnight in the city of Santa Clara at the mausoleum of Ernesto "Che" Guevara, the Argentine revolutionary who fought with the Castro brothers and died in Bolivia in 1967 while trying to realise their dream of spreading revolution across Latin America.

The ashes will be interred on Sunday morning in Santiago de Cuba, where Castro first launched his revolutionary movement in 1953 with an assault on the Moncada barracks.

The eastward journey reverses the path taken by Castro's bearded rebels upon the overthrow of US-backed strongman Fulgencio Batista, who fled Cuba on January 1, 1959. Castro spent a week traversing the island on the way to Havana, building his popularity by stopping in towns along the way.

While an anti-imperialist hero to many, especially in Latin America and Africa, Castro was also hated by his enemies who say he ruined the economy with socialism and ruthlessly jailed or silenced his opponents with a Soviet-style dictatorship.

On Tuesday night, tens if not hundreds of thousands of Cubans gathered in Havana's Revolution Square, many cheering "I am Fidel!," for a four-hour service commemorating "El Comandante" (The Commander).

Leaders of leftist allies from around the world delivered a series of speeches praising Castro for instituting free education and health care, and sending doctors overseas on missions of mercy.

No one mentioned how he jailed political opponents, sent them to work camps or, in the early days, had them shot by firing squad.

"The majority loved you with a passion. A minority hated you. But nobody could ignore you," said Ecuadorian President Rafael Correa.