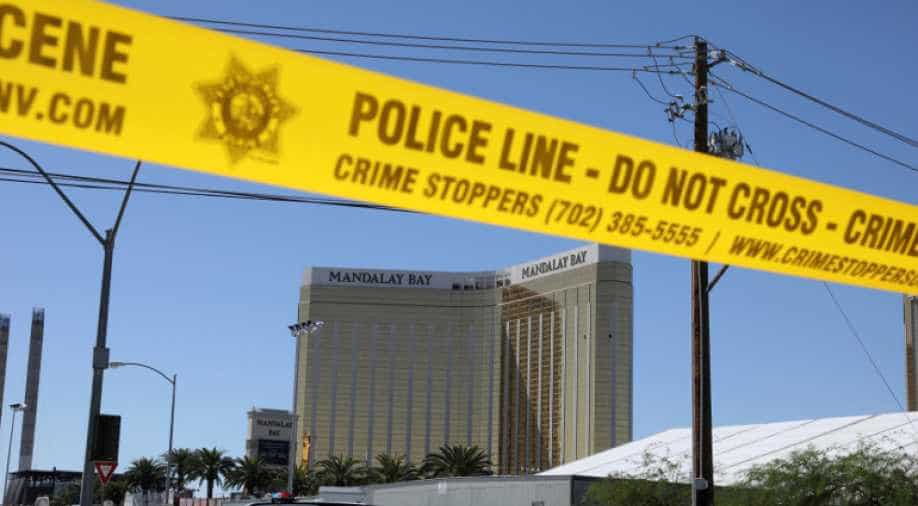 The site of the Route 91 music festival mass shooting is seen outside the Mandalay Bay Resort and Casino in Las Vegas on October 2. Photograph:( Reuters )

The mystery piece of paper, found in gunman Stephen Paddock's hotel suite, was not a suicide note and was full of random numbers||The note has been sent for analysis

The mystery piece of paper, found in gunman Stephen Paddock's hotel suite, was not a suicide note and has been sent for analysis, reported Metro, quoting Las Vegas Metropolitan Police (LVMPD) Sheriff Lombardo as saying.

The authorities have turned to the shooter's girlfriend, Marilou Danley, hoping to get clues about Paddock's motives and what may have sparked the deadliest mass shooting in the modern U.S. history.

The 64-year-old Stephen Paddock was holed up in a high-rise hotel overlooking the Las Vegas Strip and opened fire on concertgoers at a country music festival, in which 59 people were killed and more than 500 others injured.

Investigators recovered 42 firearms, an assortment of explosives and several thousand rounds of ammunition from his Las Vegas hotel room and his Mesquite home.

Investigators believe that Paddock used bump-stock for the attack as it modifies a semi-automatic weapon to fire at an automatic rate. Bump-stock is a legal device that enables a shooter to fire bullets rapidly, similar to an automatic rifle. Paddock had outfitted 12 of his firearms with the bump stocks, according to the Bureau of Alcohol, Tobacco, Firearms and Explosives. (ANI)