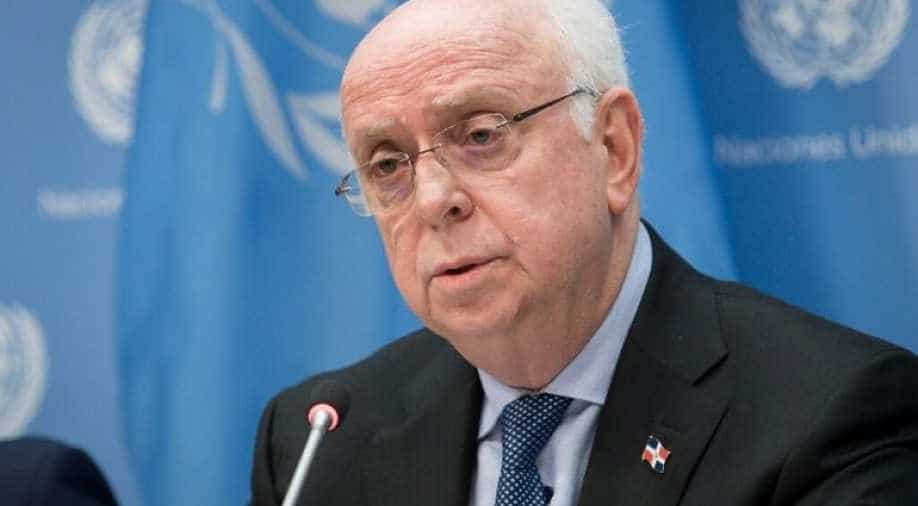 The former President of the United Nations Security Council has said "differences over the role of the World Health Organization" has "stalled" any outcomes over COVID resolution at the core UN body. Speaking exclusively to our Principal Diplomatic Correspondent Sidhant Sibal from New York, Permanent Representative of the Dominican Republic to the United Nations José Singer Weisinger said that "Security Council can’t remain silent" and "cannot remain inactive towards the response." While the first case of COVID was first reported China's Wuhan in December, it was only during the Presidency of the Dominican Republic in April that it was formally discussed. President of UNSC decides the agenda of the body and it is president for one month. All 15 countries rotationally become the president of UNSC each month, with Estonia being the President for the current month.

WION: What has been the key outcome of your Presidency of UNSC for April Month?

Jose Singer: We believe the most important outcome of the Dominican Presidency of the UN Security Council in April 2020, was transparency. From the very beginning of our Presidency, our goal was to make the Council’s discussions on Open VTCs, public. Halfway through the month, after reaching consensus from members, we managed to live feed, through the UN Web TV platform, the entirety of the Open VTCs, including briefers and UN Security Council Member statements. Additionally, as another example of a milestone, a historical moment took place on April 21st. For the first time in history, the Council held a public online discussion (Open Debate). In this case, the issue discussed was the protection of civilians from conflict-induced hunger. Furthermore, we were able to reach consensus on:

WION: Finally, talks started on COVID, what has been the progress? How soon we can see consensus on COVID resolutions?

Jose Singer: The Security Council has been holding discussions around the possible adoption of a resolution on COVID-19. Last May 5th, the Security Council held a closed consultation on this issue to discuss the way forward. At this moment progress has been achieved throughout different areas that a resolution of this kind should address from a peace and security angle.

However, as you are aware there are differences regarding the role of the World Health Organization and these differences, in part, have stalled the process for a while. Tunisia and France as the leads on this resolution have been working tenaciously in order to arrive at an agreement. The reality is that the Security Council can’t remain silent it cannot remain inactive towards the response. The members of the Security Council are on the same line in this respect, which brings an environment of deep commitment to arrive at a consensus in the coming days, but as I said, we would have to continue engaging and hope for an expedited agreement.

WION: How do u see India's role when it comes coordinated action on COVID, they have sent your country medicines too?

Jose Singer: From our point of view, India is currently an important key player in the present global order, and we are confident it will continue to do so through these hard and unprecedented times. After the COVID-19 crisis hit our nation, the Dominican Government requested our Missions around the world for some assistance and cooperation, from friendly countries and India rose to the occasion. Showing its unique solidarity and friendship towards our people, it was one of the first respondents to our request, not only including us in the 13 countries able to purchase some of the medicines being used to treat this virus, but also donating 200,000 tablets to our country.

WION: How has UNSC adopted tech, because it was under your presidency they started meeting regularly via video conference.

Jose Singer: Initially, the platform was a bit unstable and we were all trying to figure things out, including new working methods that would allow the Council to continue its work remotely. In this regard, the Dominican Presidency expresses its deepest congratulations and appreciation to the team of hard-working technical personnel of the United Nations. Without their tireless efforts to make possible all the technological arrangements, we would have not been able to proceed with our ambitious plans of keeping the work of the Council as open, transparent and fluid as possible, during the uncertain times that the global COVID-19 pandemic unexpectedly brought along.